The endless variety of food and products in Catalonia is a fact. You can have a sweet tooth or rather prefer salty or spicy dishes. You have to know, though, that your “undiscovered” favourite Catalan dish is waiting you out there. What to eat in Spring?

Here are some examples of what locals love to eat during Spring time.

April. Art and pleasure made of chocolate: Easter ‘mones’ 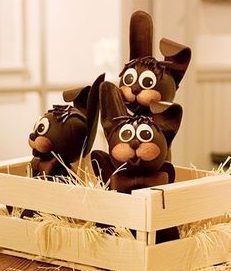 On Easter Monday it is traditional in Catalonia to eat the ‘Easter Mona’, a sweet that symbolizes that Lent and its denials have reached an end. In its origins, it was a kind of sweet bread (similar to French brioche) that godparents gave as a present to their godchildren. It had a round shape and there were several hard-boiled eggs on top, up to thirteen, depending on how old the kid was.

But the Easter Mona has evolved and now it’s a chocolate cake with chocolate figures or little toys on top. Easter Mona is the ‘bestseller’ sweet of the year. Only in 2014, a total of 670.000 ‘monas’ were sold in Catalonia. But it is also an event to take part in and admire the creativity and skills of the confectioners who build up real pieces of art… made of chocolate. From a two-metre tall Eiffel Tower to a human-size Albert Einstein. Anything is possible!

This sweet gives the confectioners a great opportunity to develop their creativity and skills. Some shops where they make incredible Mones are:

May: Eating snails. Yes we can! 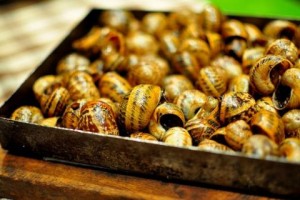 Visiting Catalonia is a great chance to try new culinary experiences. To taste different foods and dig into culinary delights You wouldn’t have enjoyed otherwise. One of the best examples is the ‘Cargol’ o ‘caragol’. Yes, we are talking about snails. If you thought that only French chefs cooked snails, the reality is that, here in Catalonia is a popular dish and some Catalans eat ‘tons’ of snails every year.

The cargol is a symbol of ancient traditional cuisine and Catalonia, a regular dish on restaurants and also a good excuse for friends and family meetings (like Calçotada’s). It is also remarkable to know that is not a really expensive delicatessen dish like in France: snails are smaller and are cooked in many different ways but the most popular is ‘a la llauna’.

So, what’s the only thing that dissuades you from eating a good plate of cargols? It’s simple: Your bravery!

Where is the “Cargol temple”?

The city of Lleida is one of the most famous places to join this dish. On May they celebrate l'”Aplec del Cargol”, a festive meeting where up to 200.000 people join together to eat snails and have fun. www.aplec.org. And, trust me, 200.000 people cannot be wrong. 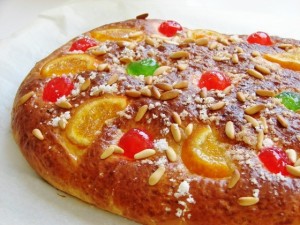 Summer starts with a delicious treat that is usually accompanied with a glass of cava, the typical catalan sparkling wine. It is typical to eat the Coca de Sant Joan the night of June 23rd. The festival being celebrated is actually the summer solstice, which occurs on June 21st in the northern hemisphere. And while the pagan festival was originally held on that date, with the arrival of Christianity it turned into the celebration of the vigil of Saint John’s the Baptist. This 2015, up to 1,6 million Coques de Sant Joan were sold, according to the Confectionary Guild of Catalonia. And only for that certain night!

Originally with a circular shape, symbolising the Sun, today’s coca’s come in all shapes and sizes: with fruits and pine nuts on top (the most typical one), with pork rinds o4 cream-filled, or marzipan inside. Many families make their own coca’s at home, and you can find it at any Catalan bakery or pastry shop.

Where to buy and eat Coques de Sant Joan?

–Turris: A bakery temple headed by Xavier Barriga, a member of the fourth generation of bakers a sensitive professional that promotes the importance of traditions. Turris is a reference on breadmaking and its coques are also worth to try. www.turris.es

–Santagloria: The presence of this brand is increasingly common in Barcelona and gives a fantastic chance to try the classic ‘Coca’, with brioche and cream, candied fruit or with crispy pork scratchings (known as ‘llardons’) on top. Yummy! www.santagloria.com

–Badia Roca: This bakery breaks with the tradition and includes an uncommon but tasty ingredient in its coques: chocolate! So, if you are a cocoa lover, this is your place. www.badiaroca.com

The best way to discover the Barcelona Gourmet ? With a local expert guide in a Private Tour !

One comment on “Colours, textures and tastes (What to eat in Spring in Catalonia)”