One of the best things about travelling in Spring is that most of the cities show how beautiful they are. Weather is sunnier and warmer and flowers blossom. All sorts of colours are everywhere, specially in Girona Temps de Flors!

Imagine Girona dressed up with millions of flowers 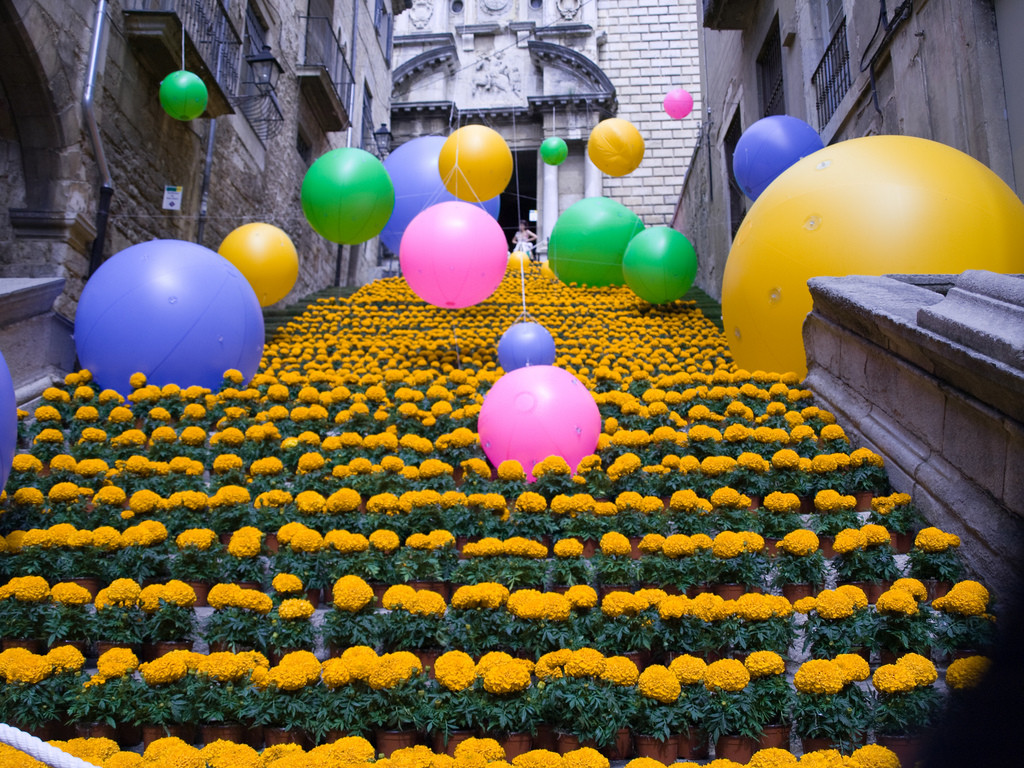 Girona is definitely a beautiful city itself but imagine how it may look like dressed up with millions of flowers!

Girona dresses up with flowers in May, for the Temps de Flors (Time for Flowers), when several streets, squares and buildings are covered with flowers, and even private houses open their doors so we can see their decorated patios. This flower show held for the first time in 1955 in the church of Sant Domènec organized by the Women’s Section of FET and the JONS. In the mid-90s, City Hall, Mayor Joaquim Nadal decided to extend the exhibition throughout the city. From this moment on floral creations of individual and professional fill the monuments of the Barri Vell. For some years it has also been expanded to the patios of the private houses. It has been celebrated for more than 60 years!

Barcelona Guide Bureau gives you the opportunity to visit Girona with The Dalí Museum and Girona Tour, which covers a guided tour in the museum of the genius Salvador Dalí and ends at the town of Girona, with its colorful houses by the Onyar river, the Cathedral and the Jewish Quarter.

We offer tours to Girona with all the comfort of travelling by the high-speed train with a licensed guide. Make your tour coincide with the “Temps de Flors” in Girona 11-19 May and enjoy in the medieval city which inspired the sixt edition of the American serie Games of Thrones. Feel like one of the stars of the worldwide hit television serie with our tour every Tuesday, Thursday or Saturday.

*How to get there? it is 100 km from Barcelona. The best way to arrive is with the high-speed train and be accompanied with our tour and personal guide.
*Better go midweek to avoid “crowds”.
*Best to book ahead because there is little availability.
*Best decorations at: steps of the Cathedral, cloister of the Cathedral, the Jueu call, private patios, exterior walls of the park and German gardens.

What you can’t miss? 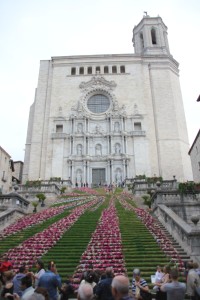 The Cathedral of Girona is located at the heart of the Força Vella. Built between the 11th and 18th centuries, it includes a series of walls and spaces in different styles, from Romanesque such the cloister and Charlemagne tower to the baroque façade and steps. Its most singular feature is its large Gothic nave from 15th-16th centuries which, at a width of 23 metres, is the widest of its kind in the world. Its construction was begun in the 11th century in Romanesque style and continued in the 13th century in Ghotic style. Of the original Romanesque edifice only the 12th-century cloister and a bell tower remain. The second bell tower was completed in the 18th century. A primitive Christian church existed here before the Islamic conquest, after which it was converted into a mosque in 717. The Franks reconquered the city in 785 under Charlemagne and the church was reconsecrated in 908. Many influences in one building to visit! 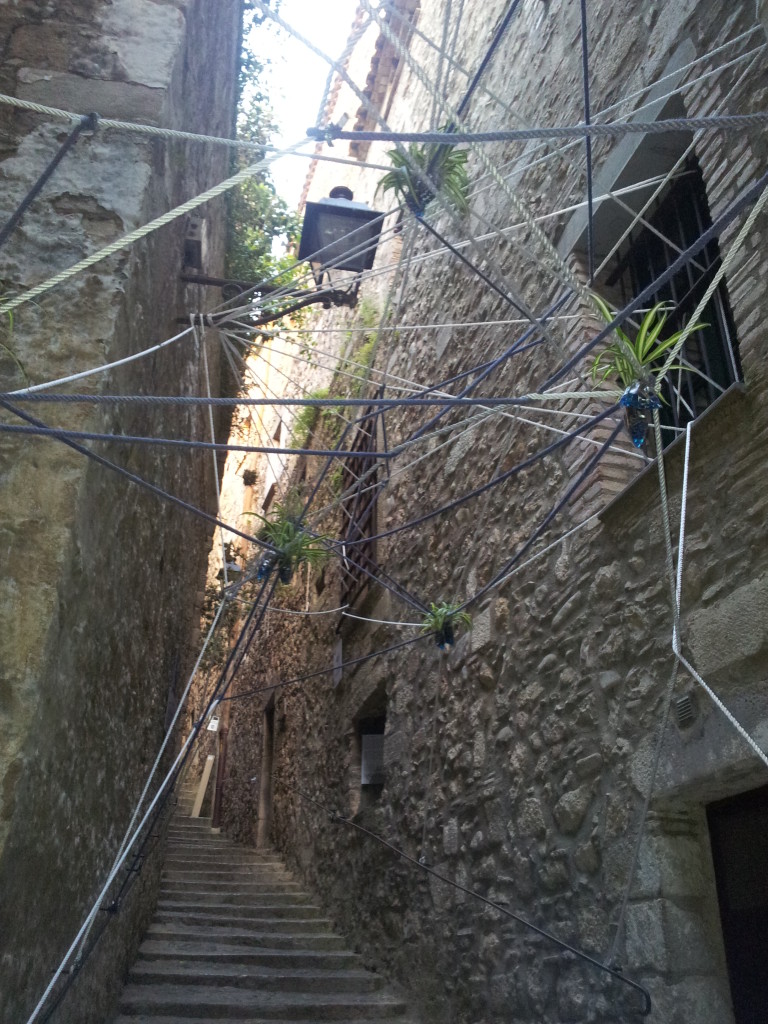 Despite these interesting additions, a place that you cannot miss in your visit to Girona is its amazing Jewish Quarter. Known as ‘El Call’, it is one of the best well-preserved medieval Jewish quarters in Europe, with beautiful old buildings –which include the Sinagogue- and charming narrow streets. The Hebrew was one of the several civilizations that settled in Girona, a 2000 year old town where many other cultures have left their footprint: from the Iberians to Greeks, Romans, Arabs and Christians.

You will have a surrealist experience at the Dalí Museum and discover the truth behind Dalí’s famous quote ‘The difference between a madman and me is that I am not mad’. And last, but not least, you will enjoy the beauty of the flowered Girona with the guided walking tour. You won’t miss any of the ‘must see’ spots of the flower festival that receives more than 200.000 visitors every year.

Such a day trip will make your travel to Barcelona an authentic experience. It is only once a year, so if you happen to be in Barcelona, remember… every corner of the city is covered by ingenious floral murals! Are you going to miss it? 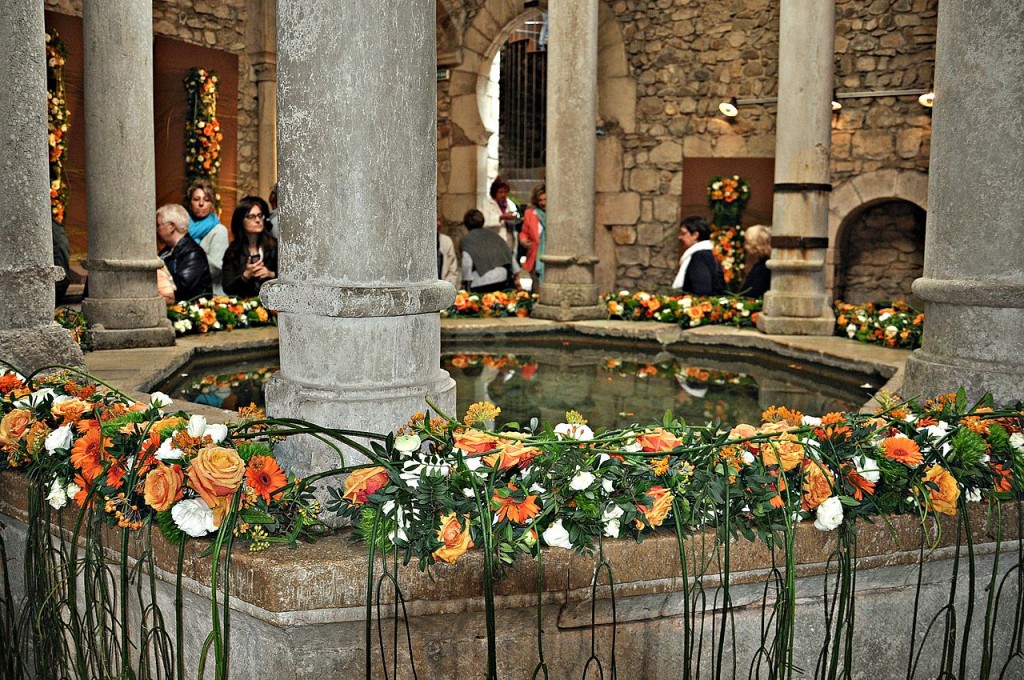 2 comments on “Girona Temps de Flors: the flower festival that floods the city of colors and scents of Spring”