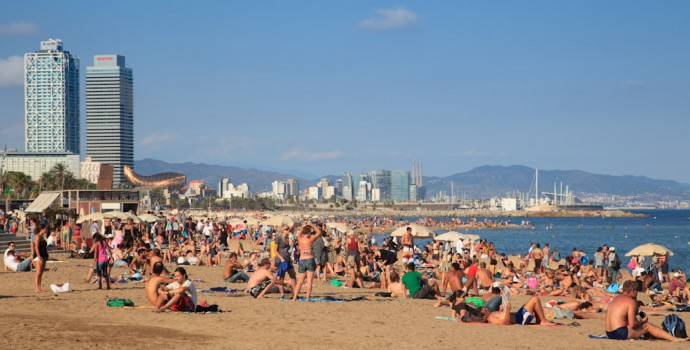 Although the beaches are one of the many reasons why hundreds of thousands of tourists are attracted to Barcelona every year, the truth is that the stylish coastline is quite recent. Believe it or not, it was not so long ago that locals lived with their backs to the sea. The transformation that the city underwent for the Olympic Games in 1992 changed this, and the factories that were standing at the coast disappeared and were consequently replaced by sand and clear water. 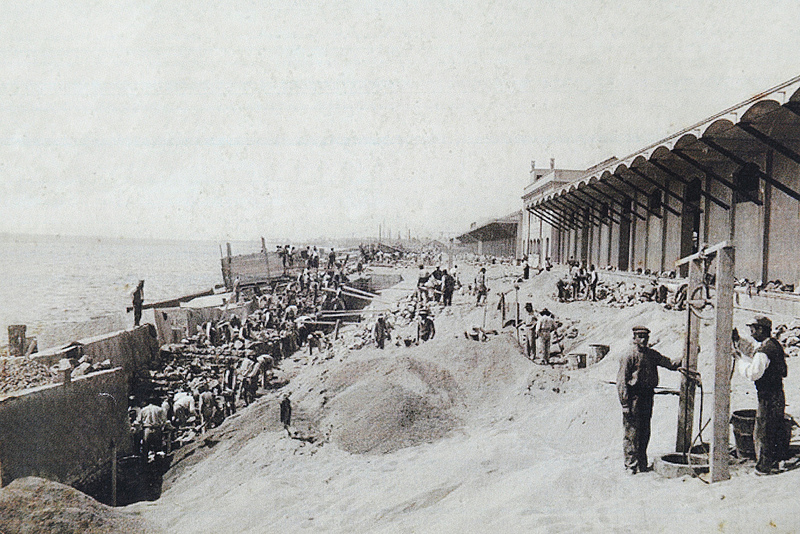 Beaches of Barceloneta before Olympic Games

All the beaches are all well communicated and include different services like toilets, sports facilities, information posts and lifeguards, among others. The long promenade that links the beaches start at the frontier to Sant Adrià de Besòs and ends at the now iconic ‘W’ hotel. During the tour Montjuïc & Panoramic you will understand the incredible transformation that the Barcelona coast suffered during the Olympic Games. 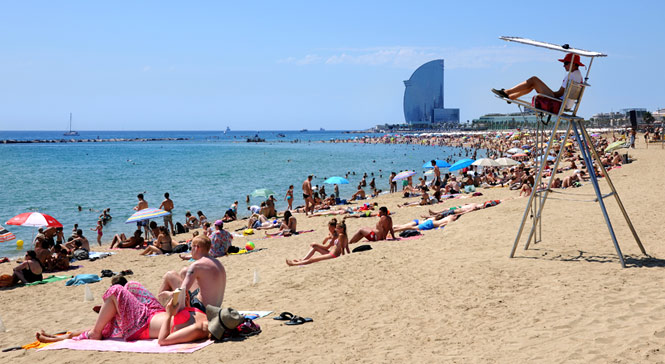 Heading north direction from Barcelona, the ‘comarca’ (region) of Maresme is the geographical link of the city to the Costa Brava. One of its peculiarities is that the railway goes along the coastline, which is an unusual and picturesque trip by train for people who are not used to. In fact, the railway section that unites the capital of Maresme, Mataró, with Barcelona was the first to be built in the Peninsula, being inaugurated as early as 1848.

Talking about the beaches, they are characterized by their white-colored sand with medium grain (not the one that gets between your toes!) and for an optimal quality of water for most of the year. Calella, Sant Pol de Mar, El Masnou, Mataró, Montgat, Malgrat or Pineda de Mar are some of the towns that have these fantastic seashores.

You can arrange some private tours to discover these amazing paradises of the catalan geography. 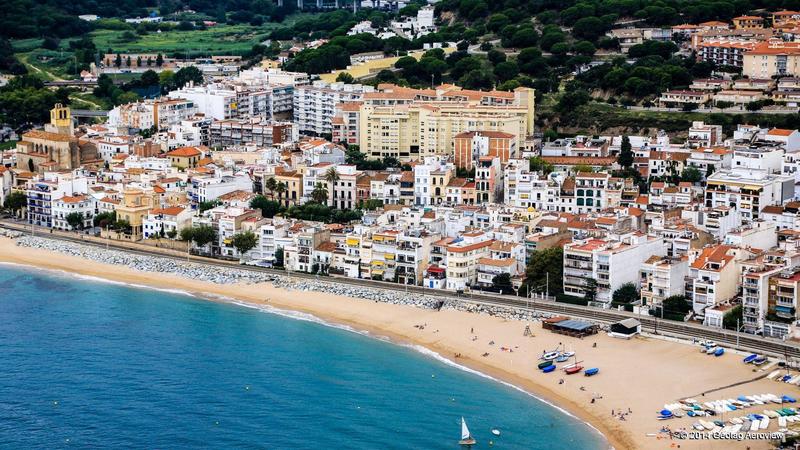 Just before arriving to Maresme, you will find the city of Badalona, with an extensive industrial history very similar to Barcelona’s past. Badalona has also transformed its “industrial-looking” coast into almost four kilometers of beaches, with an unusual background of the three chimneys of the power station in Besòs, on one side, and the recently opened port.

The ‘Pont del Petroli’ (which in catalan means ‘Oil Bridge’) is also a remarkable place to take into account, as it consists of an enormous structure that goes along 250 meters into the sea. Nowadays the ‘Pont del Petroli’ is used as a walking place for people to enjoy the views from the coast. Badalona’s beaches also include cozy and appealing sea-food restaurants and also the very popular ‘Anís del Mono’ factory, in which the famous and popular anise brand is produced. And just a few meters away, there’s a human-size reproduction of the ape that appears in the bottles label as a logo, which is said that is a cartoon of Sir Charles Darwin.

The three chimneys of the power station in Besòs in front of the beach.

Sunbathing while the planes land or take off from Barcelona’s Airport is an experience that you can live if you visit El Prat de Llobregat’s beach. This seashore is worth a visit and just because of the surroundings of it. There is a natural park with autochthonous plant species. In fact, the CRAM Foundation, a recovery and investigation center that studies the area’s sea life, is located a few meters away.

Platja d’El Prat extends from the end of river Llobregat to the Remolar pond, and part of the coast is bordered by a big extension of pine trees. 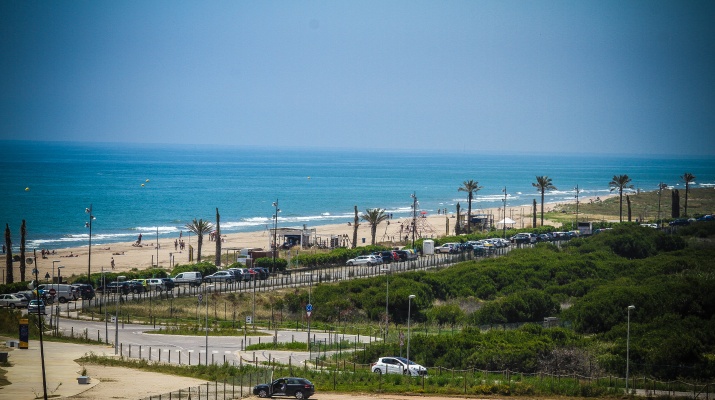 And talking about places to visit, going to Sitges is a fantastic option for  that ‘spare-day’ that you may have while visiting Barcelona. A charming little town that holds a remarkable number of 17 beaches. Before getting there (train is a good option) it is worth it to investigate and find out what sort of beach you are looking for in Sitges:  from a ‘gay-friendly’ site (especially Platja de la Bassa Rodona) to a ‘family friendly’ beach, or another beach where you can practice nudism. You can end the day visiting the interesting Museu Maricel and have your meal in on one of the, many, many restaurants that are in town. 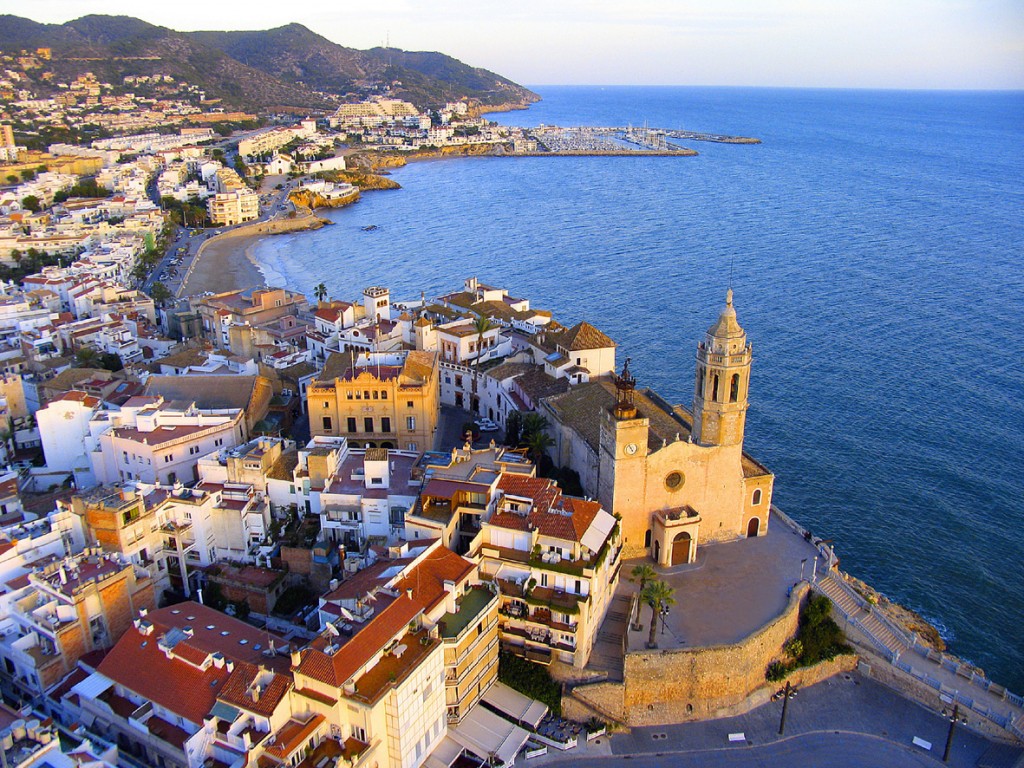 5 comments on “Sun, sea and sand: Which beaches of Barcelona are the local’s favorites?”