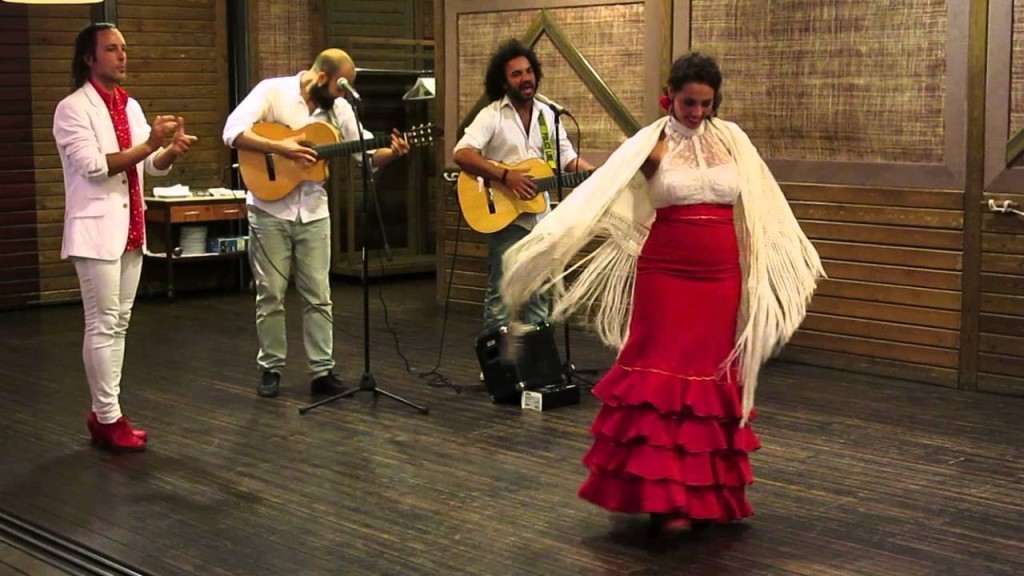 How NOT to confuse Rumba Catalana with Flamenco.

Catalonia has the privilege to add to the Unesco’s World Heritage list the works of Art Nouveau masters Antoni Gaudí and Domènech i Montaner and the not less spectacular ‘Castells’ (‘Human Castles’), among others. But there are so many other things that deserve to be known worldwide. And one of them is the ‘Rumba Catalana’.

The Catalan rumba is a rhythmical music genre developed in Barcelona around the beginning of the 1950’s by the Romani Gipsy community established in Gràcia and Raval neighbourhoods. Its sound is derived from the flamenco rumba, with influences from Cuban music and Rock and Roll, and it is synonymous of celebration when played.

Music experts claim that Catalan rumba is the only musical style created in Europe in the twentieth century, another good reason to be recognised by Unesco.

Where could you have listened to this sound before?

If you have ever visited Barcelona and joined a celebration or a party on the street, while listening this style of music you may not be able to prevent yourself from tapping your feet on the floor to this unstoppable and rhythmical music based on Spanish guitar and percussion.
But there is also a possibility that you have listened to Catalan Rumba before. Remember the 80’s hit ‘Bamboleo‘ by Gipsy Kings? Despite being a band from the French cities of Arles and Montpellier, they played this style to pay tribute to their roots. In fact, the parents of the band members –who belonged to the Baliarda’s and Reyes’s clans-, migrated from Catalonia to France in the 1930’s to leave behind the horror and poverty of the Spanish Civil War.

If you are a Eurovision Fan, it may be interesting for you to know that on 1974 Spain sent one of the most important Catalan Rumba stars: Pere Pubill Calaf – more commonly known as “Peret”-, who played the cheerful song ‘Canta y sé feliz’ (“Sing and be happy”). Here is an “ear candy”:

Unfortunately, the song only reached a discreet tenth position (out of seventeen contestants), in an edition in which ‘Waterloo’ by Swedish band ABBA , came first, thus becoming the winners that year.

If you aren’t very familiar to this style yet, we must remind you that Catalan Rumba was very present in a historic event: the 1992’s Barcelona Olympic Games. The closing ceremony became a celebration of life with the performance of the previously mentioned Peret but also from ‘Los Manolos’ who did a rumba style cover of Beatles song ‘All my loving‘. They also played a rumba version of the Olympic official song ‘Amics per Sempre‘ (Friends for life), written by Sir Andrew Lloyd Webber and originally performed by Sarah Brightman and the Catalan tenor Josep Carreras.

But what’s the difference between Catalan Rumba and Flamenco?

Considering that we are talking about popular music that was born and evolved in the streets and not in music academies, there is not an exact definition or science to explain the difference between these two styles.

However, Flamenco has three main elements, one of them called ‘Palo’ (‘stick’) which marks the compass. Some ‘palos’ of Flamenco are ‘fandango’, “seguiriyas” or ‘bulerías’; and one of them is also called ‘rumba’. It has more beats per minute, which means that its rhythm is “faster”, and has also the characteristic that is more “festive” style in comparison to the dramatic, soulful and tragic sounds of Flamenco.

By the way!: Flamenco is in the Unesco list since 2010, the same year as Catalan Human Castles, the ‘Castellers’, were included.

The promoters that aim to include Catalan Rumba in the Unesco heritage list claim that, despite its influence and the use of guitars, percussion and palms, it is a musical genre by itself. 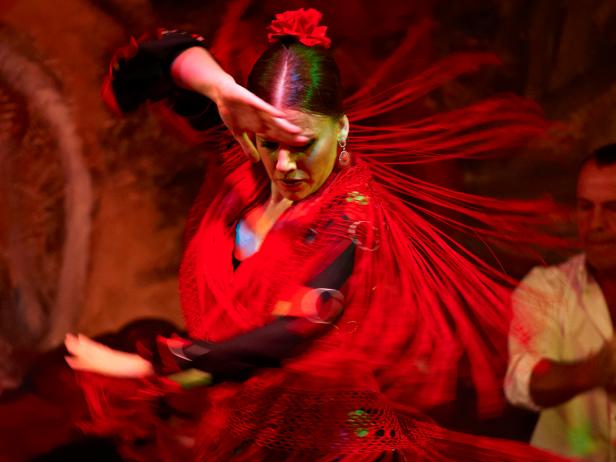 Deep flamenco expression of the dancer on stage

One reason that defines Catalan Rumba as a style on its own instead of being a “palo” of Flamenco is its evident influence of Caribbean sounds, and more specifically Cuban music (which, at the same time has its roots on African music). 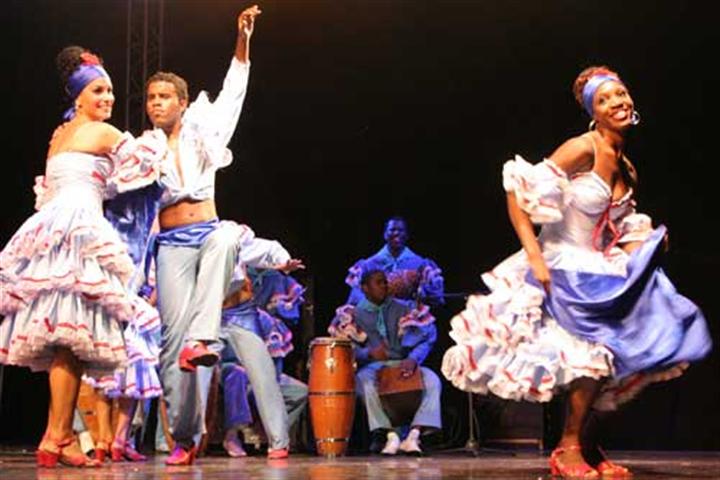 Three aspects define the Catalan Rumba. Firstly, the technique called the ‘ventilador’ (literally ‘fan’ in Spanish), a peculiar way of playing the guitar which consists in clapping the hand against the case of the instrument while playing the chords at the same time. Then there is the ‘martell’ (‘Hammer’ element, the basic rhythm of Caribbean bongo playing. Finally, the festive sound and the usual cheerful issues of the songs, more related to the raunchy and “second meaning” lyrics of Cuban music rather than the expression of pain and deepness of Flamenco.

Tip!: A good way to start spotting the difference between Flamenco and Rumba is to join a show. One of the best places in Barcelona is Palacio del Flamenco, a theatre that has  been offering excellent flamenco performances since 1920. Located in the heart of the city (nearest metro station is 1entric ‘Diagonal’ on the green and blue line) the show is about one hour long, and prior to that  you can enjoy a 30 minute free flamenco lesson and have some dinner.

Where to listen Catalan Rumba in Barcelona:

The extrovert personality of Barcelona and its people makes it really easy to listen to live music almost everywhere. It is even easier when we talk about an “autochthonous” style. Lots of local “Festes Majors” (anual neighbourhood celebrations) include rumba, especially in Gràcia which celebrates its “Festa Major” on the second half of August.

If you are not able to travel to Catalonia in Summer, you can visit one of the best known places where you can listen to rumba: “La Rumbeta”, a club which offers concerts and a really good Rumba experience with the chance to eat some Catalan food and wine delicatessen! You can find out more in this post I wrote: Live! Fantastic music venues to enjoy concerts in Barcelona. 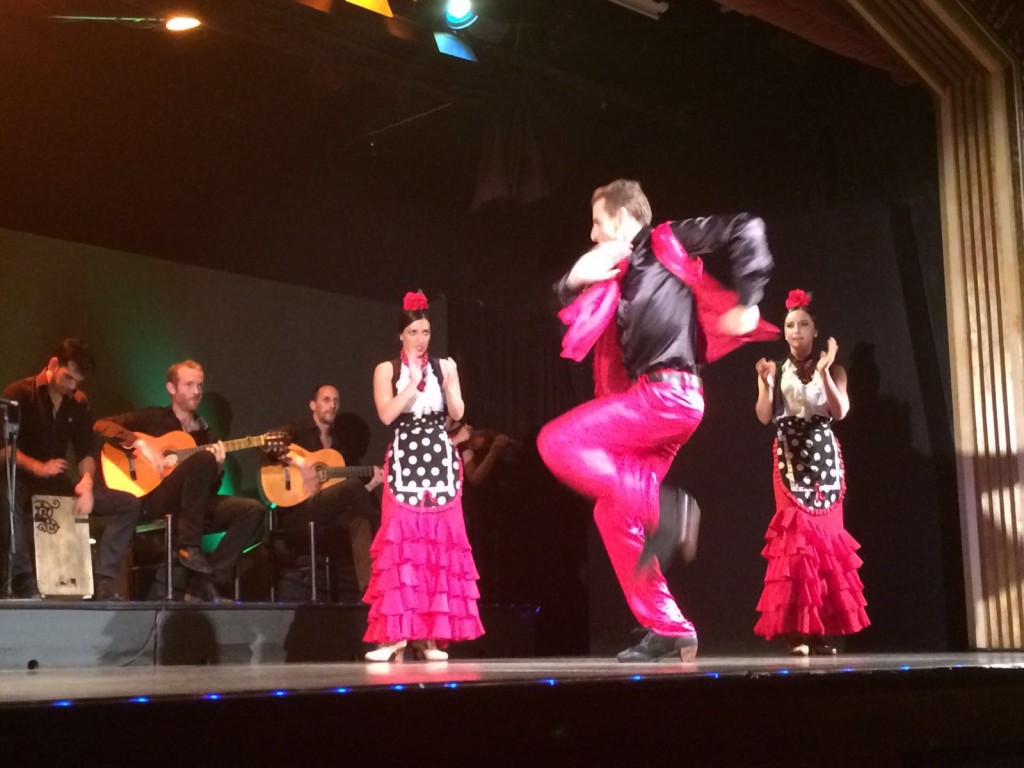 Last but not least, follow the advice of another big name of the Rumba Catalana, Antonio González ‘El Pescaílla’, who suggested in one of his songs “Sarandonga”.

“This life you have to drink it, in little sips of glass,

2 comments on “Rumba Catalana: A cheerful music that aspires to become universal”