La Mercè is the Festa Major of Barcelona, when we celebrate the Saint’s Day of Our Lady of Mercy, La Mare de Déu de la Mercè. It has been an official city holiday since 1871, which first consisted of a Roman Catholic festivity commemorating St. Mercè on 24 September.

The opening speech will be given by Javier Perez Andújar. Javier was born in Sant Adrià de Besos in 1965 and graduated in Philology at the University of Barcelona. The letter written is his life. In his works he describes the spirit and mystique of the metropolitan Barcelona.

Some of the most important features of the La Mercè festival were introduced in 1902. There were parades of papier-mâché “giants” known as gegants i capgrossos, the first Castell competition in the city, and a dance from the Empordà region that was becoming popular throughout Catalonia: the Sardana. The holiday has grown an immense local popularity ever since. 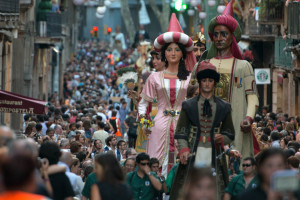 Look at the City’s Giants

The celebration of La Mercè has religious origins, honouring the Virgin of Grace (Mare de Déu de la Mercè), patron saint of the archdiocese of Barcelona, and co-patroness of the city, along with Saint Eulàlia. In Catalan, the word mercè has meanings related to service, help, a sense of compassion, and loving mercy. In the Gothic Quarter of Barcelona, there is a basilica dedicated to the Virgin, where a wooden image of her is venerated.

The festival comes from the Middle Ages when, in 1687, Barcelona suffered a plague of locusts. To fight against the insects, the Consell de Cent, which then governed the city, voted to ask the Virgin’s assistance. When the city was delivered from the pestilence, she was named patroness of the city of Barcelona, although this was only recognized by the Pope in 1868. Since then, La Mercè Festival is celebrated in honour of the Virgin, starting on the 22st of September and finishing on the 25th. Find the agenda here.