Unique Architecture, large variety of delicious food, sun, beach, friendly people, cosmopolitan atmosphere…there are so many ways to define Barcelona. But in the little stories that hides Catalonia’s capital you realize the reason of its personality.

We’ve chosen seven facts of Barcelona that you might not know, but probably will get you craving to visit the city. 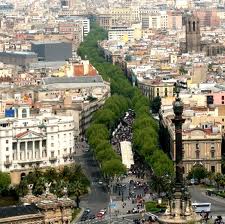 The famous spanish poet Federico García Lorca said that ‘La Rambla’ was “the only street in the world which I wish would never end”. The curious thing is that there is not only one ‘rambla’, there are actually five! The other surprising fact is that Barcelona’s most famous pedestrian street was in the a stream of water that flowed down from the mountains to the Mediterranean sea.

The word ‘rambla’ is the ‘Catalanised’ form of the Arab term ‘ramla’, which means ‘sandy ground’, ‘stream’ or ‘watercourse’. In addition to this, Barcelona was one of the first modern cities to have an established sewer system. 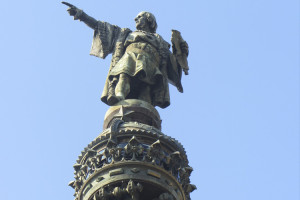 A stroll down Las Ramblas ends just in front of Christopher Columbus Monument. An impressive statue  overlooking the city from a height of more than 50 metres that represents America’s discoverer. But, did you know that the sculpture doesn’t point to America?

There are several stories about this fact. Some of them talk about ‘aesthetic reasons’ to make sure that the statue points to the sea (and not into las Ramblas, which would be the right direction and where America is).

About where does it point, it is said that Algeria is the destination, while others assure that is a quarter in Palma de Mallorca town called ‘Geneva’, coincidentally, the Italian city with the same name is where Columbus was born. 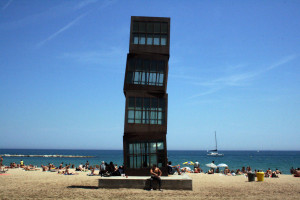 Believe it or not, one of the main attractions of Barcelona exists quite recently. Back in the day, the seacoast was covered by industrial companies, the city was growing  following an absurd planning that made that locals had to live ignoring the sea. The result was that there was no beach for the use of the city’s populace and tourism.

Luckily, for the preparation for the Summer Olympic Games in 1992, the city relocated the factories and brought in sand to convert the sea coast into a leisure area with beaches, hotels, bars and restaurants as we know it today.

4.-A City with two stories

The official founding of Barcelona is one of the biggest curiosities that still exists to this day. There are two legends concerning the founding of Barcelona. The first says that the city was founded by Hercules 400 years before the city of Rome was built. The latter says that the father of Hannibal, Hamilcar Barca, founded the Catalonia’s capital in the 3rd century BC and established the centre in the old city Barcino (now the area is known as the Gothic Quarter), naming it after his family, the Barca dinasty of Carthage. And thus, Barcelona was born!

5.-The Eiffel Tower in Barcelona? 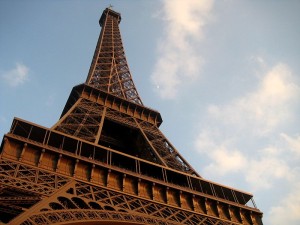 The symbol ‘par excellence’ of Paris, could have been in Barcelona. It might sound as a joke or science-fiction, but it is a real story. The Catalan city was the first option for architect and designer Gustav Eiffel to build the 300 meters-tall steel tower for the upcoming Universal Exposition in 1888. However, the coordinators of the event thought that the project was too ‘radical’ and did not fit with the current Barcelona’s aesthetics. They ended up rejecting the tower and chose a more ‘classical-looking’ monument: what we know as the ‘Arc del Triomf’.

A year later, on March 31, 1889, the construction of the Eiffel Tower ended. It was considered that the tower could become an emblem to remember the Universal Exhibition in Paris but it was also planned that after the event, the tower was going to be dismantled. This never happened and, nowadays, the Eiffel Tower receives seven million visitors every year.

6.-Why Barcelona cabs are Black and Yellow? 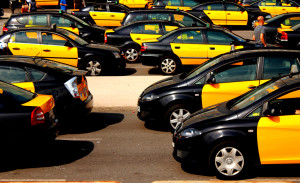 The unmistakable Black and Yellow coloured taxis are a distinctive brand of Barcelona. But why these colours? Back in 1924 the city Council approved a highway code that required them to be painted with a line under the window to make identification easier. Those stripes could be red, white, blue or yellow depending on the rate of the service. With the boom of the Universal Exhibition of 1929 the number of taxis in Barcelona multiplied from 250 (in the early 20’s),  to 4.000 at the end of the decade. So, to prevent illegal cars and other unfair rates , the council decided to institutionalize the black and yellow combination as the official colour of the taxis.

Curiosities: Not only in Barcelona you can find black and yellow painted cabs. Mumbai, in India, and Chile also use these colours. Also in the Argentinian city of Rosario…coincidentally the birthplace of Futbol Club Barcelona’s star, Lionel Messi.

7.-Tibidabo, or how the Devil tried to tempt Jesus Christ 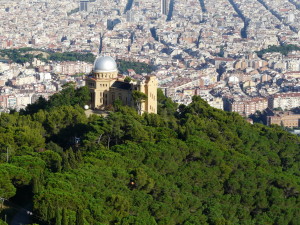 With a height of 512 metres (1,680 ft), Tibidabo is the tallest mountain of Collserola and allows spectacular views over the city and the surrounding coastline. On top you can find the ‘Sagrat Cor’ Church and the amusement park.

But, where does the name of ‘Tibidabo’ come from? It is said that it derives from the Latin Vulgate Bible verses. The first is from Matthew 4:9 :

– “And saith unto him, All these things will I give thee, if thou wilt fall down and worship me”

– “All this power will I give thee, and the glory of them: for that is delivered unto me; and to whomsoever I will I give it”

So ‘Tibi dabo’ means something similar to ‘I will give to you’, and was a phrase said to Jesus by the devil as they looked down from an “exceedingly high mountain” upon “all the kingdoms of the world, and the glory of them”.

The name of Barcelona’s hill thus refers to the popular tradition that it was in fact the “exceedingly high mountain” itself.