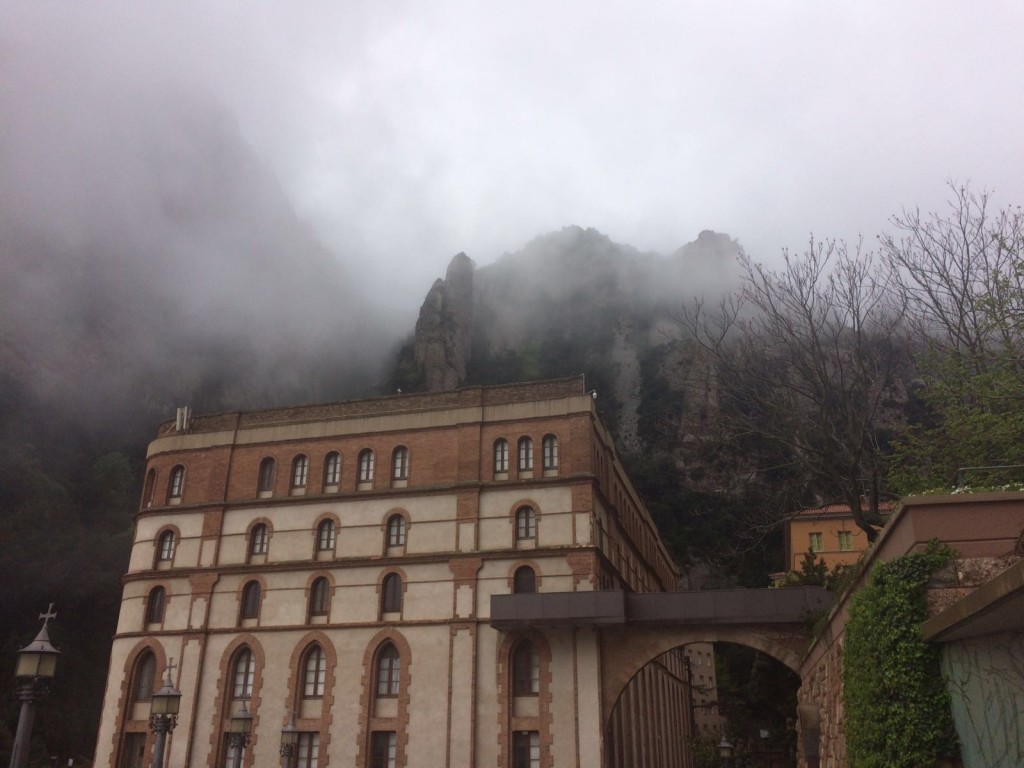 Montserrat is located 50 kilometers northwest of Barcelona. It is one of the most beautiful and admirable mountains in the world due to its abrupt and huge shapes. Its appearance impressive and threatening have created many legends around it. The impact it produces the first time you arrive at the mountain and contemplate the panorama is indescribable. It is a sense of mysticism and reflection that traps body and mind and offers you an aura of magical tranquility.

The interior of the mountain hides an even more mysterious world, a network of caves that are focus of many stories and legends. One of those caves, the most outstanding for its size, is the Cave of Salnitre or Cave of Collbató of almost a kilometer long.

Here our favourite legends of Montserrat and stories that you must know before visiting this amazing natural park.

The Madonna of Montserrat:

According to the legend, the Madonna of Montserrat, “La Moreneta”, was found in the year 888 by some shepherds in a cave of the mountain (the “Santa Cova”). They went to the place after seeing some fireballs that came out of the cave. The lights were so strong than illuminated the church and part of Manresa. When they arrived, they found the Madonna inside the cave so they decided to transfer her to the city of Manresa but the figure began to weigh more and more. They understood then that the sacred Madonna wanted to stay in the place where the monastery is located today. Since then, there were many miracles that are associated to “la Moreneta” and her fame has grown throughout Europe.

This legend was testified by thousands of people and by the authorities. Since then, the city of Manresa has always celebrated this event with the “Festes de la Llum”, which take place in February. 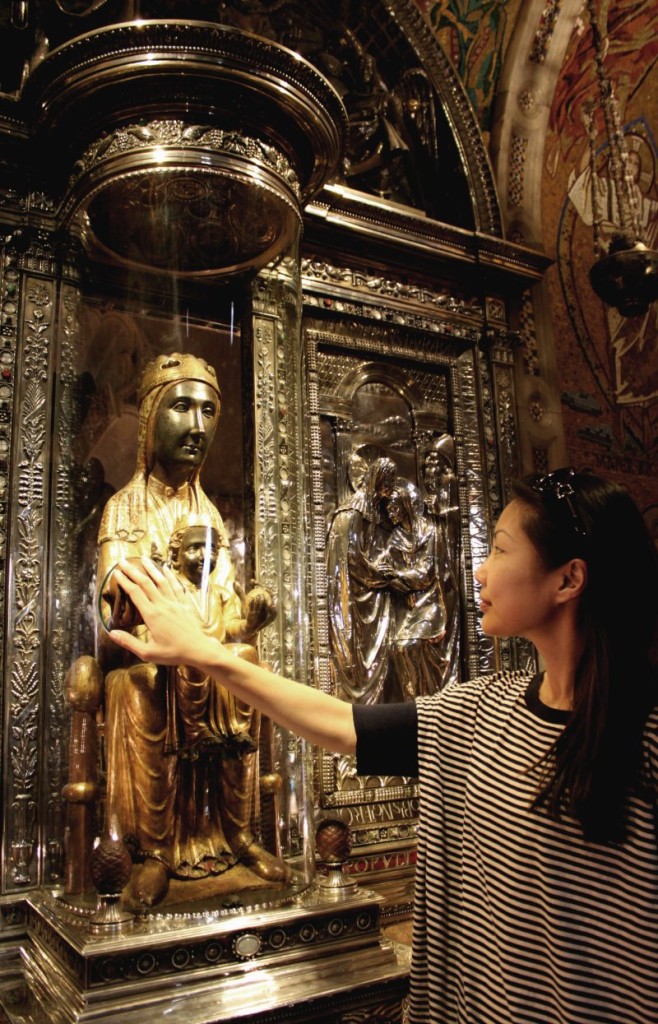 This legend tells the story of a young man who, with his drum and the noise that the mountain did when he redoubled it, made the French troops of Napoleon Bonaparte left the sacred place. As they thought that the echo of the drum was a numerous army that came to fight against them. 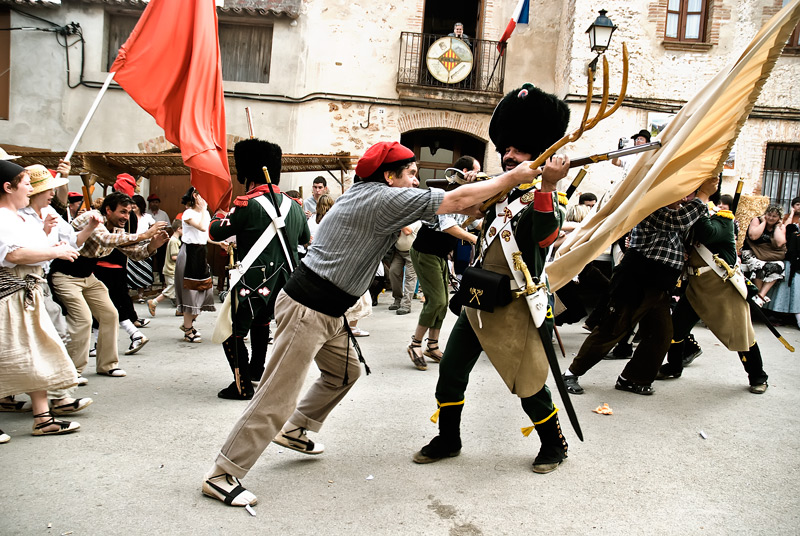 Performance in Manresa of one of the legends

There is a great variety of legends, such as the conversion of Ignacio de Loyola in the 16th century. Iñigo, a Basque warrior had his conversion after venerating the virgin and overcome the temptation in a cave of Manresa. The soldier left his sword in the monastery and later founded the order of the Jesuits.

According to some testimonies of citizens of Manresa in the year 1345 stars were spotted on the peaks of Montserrat. In the 70’s some people assured to have been abducted by aliens or seen UFOs. These facts have motivated many curious and fans of the alien world to meet every day waiting for the approach of extraplanetary life.

Earth of energies that opens doors to other dimensions:

The natural park is formed by needles and monoliths of calcareous formation that act in Montserrat like powerful antennas that emit frequencies of geobiological magnetism. In addition, the storage of water in the subterranean caverns of the mountain produces a strong environmental ionization. These forces are perceived consciously or unconsciously by the visitors.

There are esoteric groups that perform their rituals invoking the magnetic forces that arise from the earth to enhance the chakra of the human being.

Believers or not, the truth is that there have been strange events in these lands, such as the disappearance of people without a trace. It is true that it is very easy to get lost in the mountains and that some roads end in cliffs. But the total disappearance of the bodies is something that keeps the investigations confused. It is said that in Montserrat there are inter-dimensional doors. Be careful when walking in the mountain to do not pass through one of them 🙂 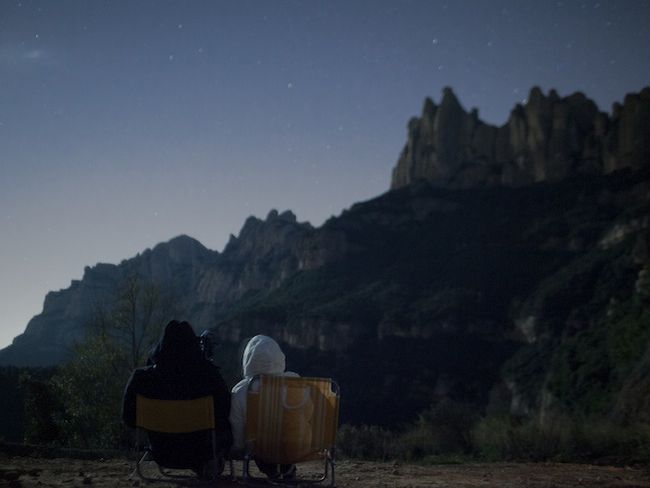 Couple waiting for ovnis in Montserrat

The Grail Mythology during the age of the Crusade of Europe locates the exact location of the sacred chalice near the Pyrenees, on the mountain called Mont-Salvat. Many people believed that Mont-Salvat was Montserrat. This motivated many adventurers to seek the precious treasure. The Nazis were one of them. It is said that Himmler, the Reichführer SS, visited Barcelona and looked for the Holy Grail in Montserrat in 1940. The Nazis tried to get the Force emanating from the Grail to become invincible. Himmler himself showed special interest in the geological formations of the mountain and his underground world. However, Hitler was not able to seize the Holy Chalice. 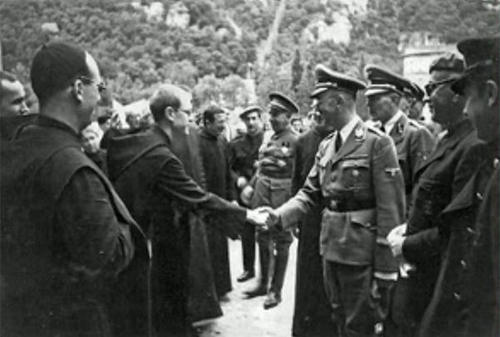 Nazis visiting the monks in Montserrat

The mysticism of The Vespers:

Don’t forget to walk around the monastery, where there is still a community of 70 monks that live there. Get close to the Black Madonna with no queues. And the absolute best experience of all: listen to the children’s choir, the Escolania, in the evening. The audience is small and quiet, so the children’s angelical voices will reach to you clearly at 6.45 pm so you can see the Vespers, the evening singing of the boys’ choir. 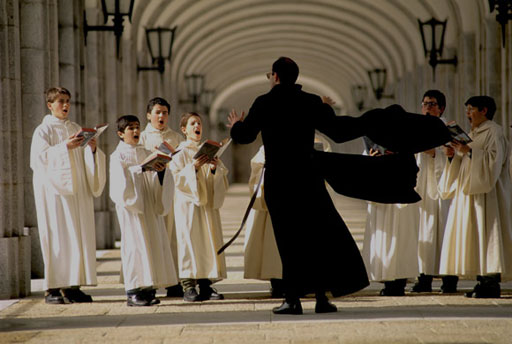 3 comments on “The legends hidden in the mountain of Montserrat”