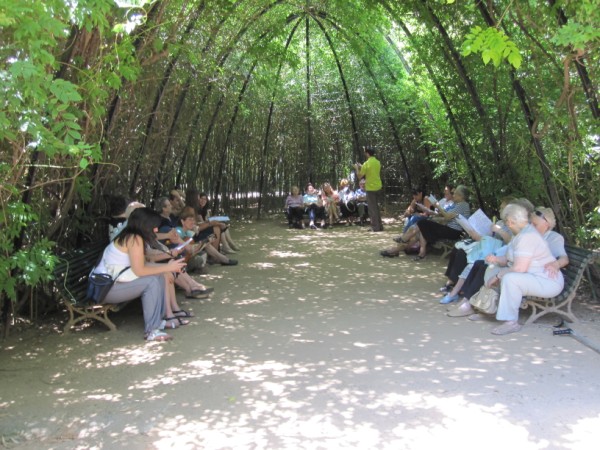 Parks of Barcelona – The best place to be in the hot summers of the city.

What would we do without our city parks?  Even though you might have visited Barcelona before, maybe you didn’t have time to visit and enjoy the wonderful green offer the city has at our disposal. Barcelona has 2.784 hectares of beautiful parks and gardens. People, young and old, come here to enjoy their magnificent beauty and try to escape from everyday rushes.

Maybe Park Güell and Parc de la Ciutadella are the best known parks of the city, but let us discover you 7 hidden green treasures that even some locals ignore that they exist. 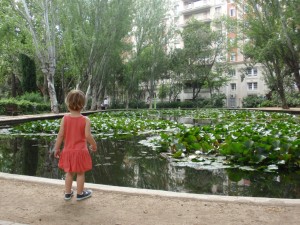 Turó Park – A quiet green lung in the middle of Barcelona

The origins of these gardens situated in Sarrià – Sant Gervasi are an old amusement park that was active between 1912 and 1929, called Turó Park Funfair. Since its creation it has been one of the most emblematic parks of Barcelona.

Today the Turó Park is a small, friendly and elegant space. One of the most beautiful places of the park is the pond, surrounded by trees and covered by water lilies that blossom in spring.

Our recommendation: Take your time to also admire the sculptures scattered along the paths. 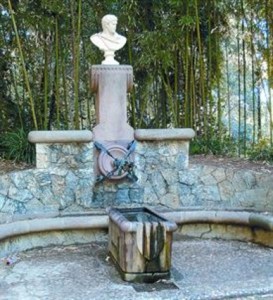 Behind a 250 meter long wall covered by bougainvilleas, you will find one of the most posh parks of Barcelona: so romantic and luscious that delving in it takes you back to a time where life was lived at a different pace.

Situated near FC Barcelona Stadium, between 1919 and 1931, it accommodated the residence of the Spanish Royal Family in their visits to Barcelona.

Many important architects, engineers and landscape specialists worked in the project. Even a young Gaudí had to do with the first design of the park, constructing 2 fountains and a pergola.

Our recommendation: Don’t miss the Hercules Fountain design by Gaudí.

3. Parc Castell de l’Oreneta – Perfect for a Day with Kids 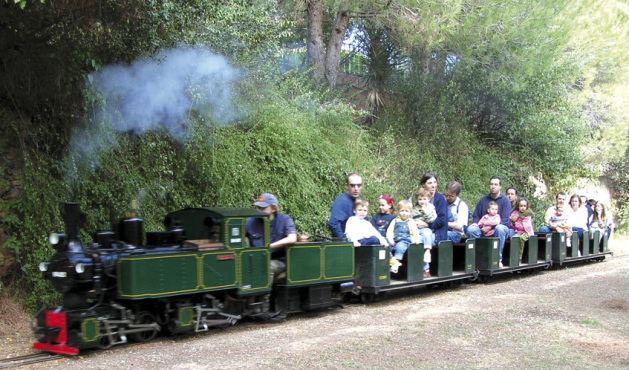 Oreneta Park – A magic place for kids and grown ups

The Castell de l’Oreneta park is a big green space that connects Barcelona and the Collserola Mountains. The park is the result of the sum of two old rural estates.

Here you can stroll around 17 hectares and “conquer” the remainings of a castle called de l’Oreneta (swallow) which gives its name to the park.

The Parc de l’Oreneta is the perfect place to go for a day out with the kids.  For grown-ups, it’s a place where they can observe the wide variety of Mediterranean vegetation. For the little ones, it’s simply a world of excitement with castles, a miniature steam train and the possibility of riding a pony.

Our recommendation: Don’t forget your camera: the views of Barcelona are impressive. 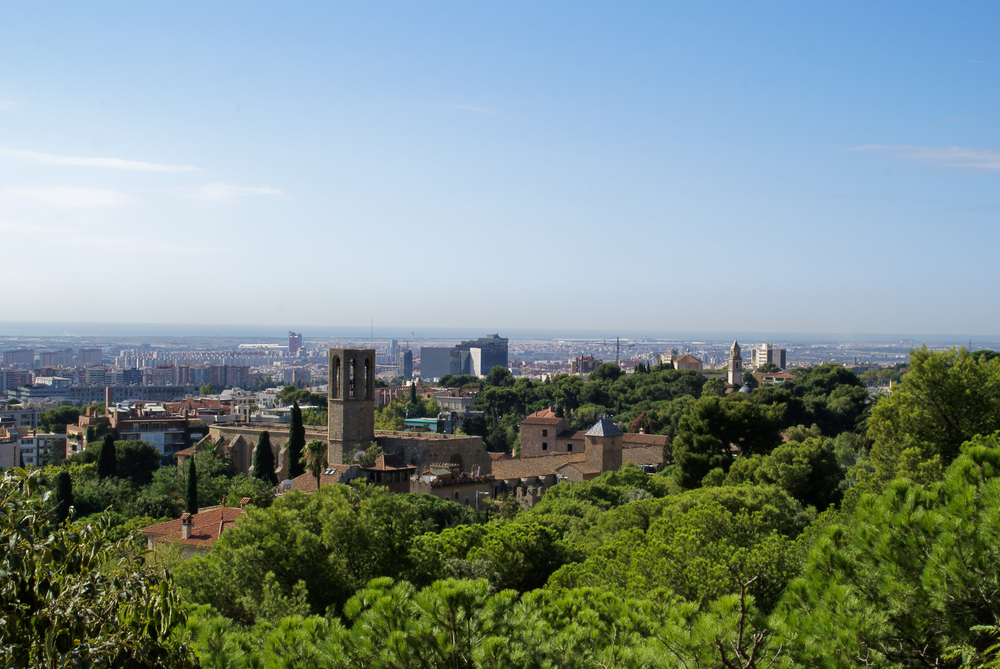 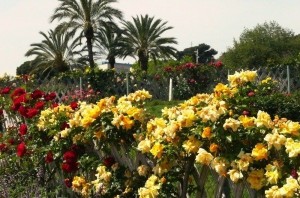 All the colors reflected in 245 varieties of roses is what you will find at the Parc de Cervantes situated at the end of the Diagonal. You can enjoy the colorful spectacle nearly all year round: thanks to Barcelona’s mild climate, 10.000 rose bushes bloom from April to November.

The park contains a beautiful collection of roses set out along an unusual botanical trail, featuring varieties in all shapes and colors from every continent of the world.
Our recommendation: This is an ideal park for jogging so take your running shoes with you.  If you want to know more about running in Barcelona check this post. 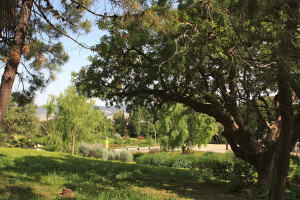 The Montjuic Hill has been part of the history of Barcelona since its foundation. But it took until 1929 to develop the area in what it is now: the biggest green lung of Barcelona.

Montjuic is renowned by its museums, such as the Fundació Miró , the Museu d’Arqueologia, or the Museu Nacional d’Art de Catalunya-MNAC.

But, you can also discover architectonic jewels as Mies van der Rohe Pavillion (German pavilion at the 1929 International Exhibition) or the former Casaramona textile factory (a modernista – Catalan Art Noveau – landmark by Puig i Cadafalch now home to CaixaForum). Or have a look at what 1992 Olympic Games contributed to the city: The Olympic Ring, the main site of the Olympic Games, features the stadium, the Estadi Lluís Companys, Arata Izosaki’s sports palace, the Palau Sant Jordi, and the telecommunications tower designed by Santiago Calatrava.  The Magic Fountain and the Poble Espanyol, with its “artisans’ village”, are other places of interest in Montjuic which are a must-see.

But while you explore the Parc de Montjuic, make sure you do not miss the magnificent parks and gardens you will find along: Jardins Joan Brossa (picnic and climbing area) Jardins Mossen Costa (800 varieties of cactus), The Jardín Botánico or the Jardins de Mossen Cinto Verdaguer (tulips, daffodils, hyacinths, dahlias).

Our recommendation: The music, light and music show of the Magic Fountain is a must. 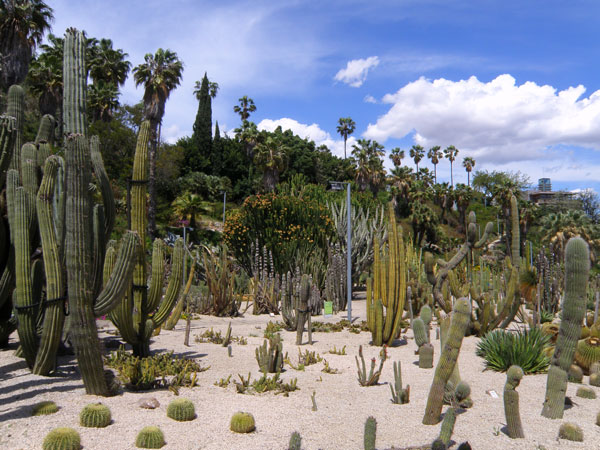 More than 800 varieties of cactus wait for you in Montjuic

There are parks that are almost forest-like, and Turo de la Peira Park is one of them. Inside the park and breathing the scent of Mediterranean plants it’s easy to forget, for some minutes, that you are in Barcelona.

The park opened in 1936 and was remodeled in 1977 using land that once belonged to an old farmhouse.

It slopes up the hill, in a spiral of circular paths that take us to the top that’s crowned by a cross. On the way up there are landscaped grass areas and a wonderful pine grove.

There are relaxing areas with benches, viewing platforms and children playing areas.
Our recommendation: Get to the top of the hill and enjoy the breathtaking 360º views of Barcelona. 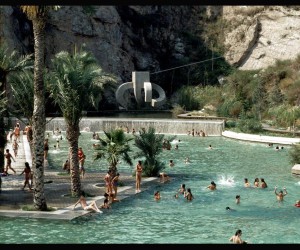 Renowned for its large public bathing pool, Barcelona’s Park de la Creueta del Coll has the same name as the neighborhood where it is located. A green space in Gracia’s district with a unique area for bathing which also contains some artistic surprises.

The Parc de la Creueta del Coll opened in 1976 and since then, its one of the favorite leisure places for the neighbors of Gracia. Once inside the park, there are ping-pong tables, picnic and play areas and a shallow bathing pool. The jewel of the park is Eduardo Chillida’s claw-shaped sculpture, In Praise of Water.
Our recommendation: Don’t miss the Park Güell which is very close and take your swimming suit with you.

A city park is more than green space in the middle of the concrete jungle—it makes a city lovable and livable. Parks provide an oasis from the noisy traffic, an escape from ambulance sirens and car horns.  These natural spaces are the perfect antidote to that burned-out, extenuation feeling that comes from a full day of walking, line waiting and sightseeing.

Tell us which are your favorite Barcelona’s green spots!