Make the most of it while you stay in Barcelona and discover why ‘Barça’ Is “more than a club”.

One of the best ways to make your holidays in the city memorable is to see a live football match in Camp Nou’s stadium. Messi, Suárez, Piqué and other soccer stars are waiting for you. Make this experience a night to remember just by following some advice from our ‘experts’ ;). And, don’t forget: Barça! Barça!, Baaaarça!!

Do not trust offers or outlets that are offered in resale and are not official, as that would suppose a criminal offense. If you know the dates of your trip to Barcelona, a good option is to pre-buy your tickets online on the official Futbol Club Barcelona website. 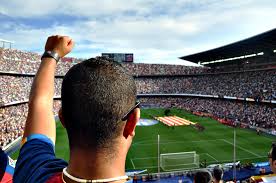 Fan in the stadium

The most comfortable way is by taxi. It is also more expensive (though Barcelona ‘cabs’ are not terribly costly in comparison to other European cities).

You should consider the high demand on taxis in the hours prior to the match, and that there is a high chance to find some ‘traffic jam’s’ around the stadium, keeping in mind that it is located in a particularly centric location within the city. Having said that, don’t forget to carry a little bit of patience with you when you get there.

Even so, the easiest and most convenient way to get to Camp Nou is by using public transportation. There are several metro and/or bus lines that stop in the surroundings of the venue.

Football matches are usually at the weekends and on Tuesdays and Wednesdays, following the Champions League and Copa del Rey schedule.

The Metro is one of the best ways to get to Futbol Club Barcelona’s Stadium. The line you have to take is the L3 (Green Line), which connects the stops of Plaça Catalunya, Passeig de Gràcia or Diagonal to Camp Nou. The nearest stations available for you are Les Corts (quite busy) and Palau Reial. Another option is the blue line, which also stops at Diagonal, and also Sagrada Familia which connects with Collblanc and Badal stations.

It is useful to know which is your entrance number beforehand. It is a long way walking from one side to the other. So, ‘Les Corts’ station is the nearest station for gates 17 to 21, ‘Maria Cristina’ is nearer gate numbers 1 to 8 and ‘Palau Reial’ is the best stop if you have to get to gates 9 to 15.

It is greatly advisable to pick your transportation option with enough previous consideration, as it can certainly get really crowded, and you certainly need enough time to get into the stadium and find your seat. We also warn you (in Barcelona and all the cities in the world) to always watch out for your belongings and pockets. Some tips…

Last but not least, you can also take the ‘Tram‘ rail, which connects plaça Francesc Macià with the south of the city along the Diagonal. Stops are ‘Pius XII’, ‘Palau Reial’, ‘Maria Cristina’ i ‘Avinguda Xile’. 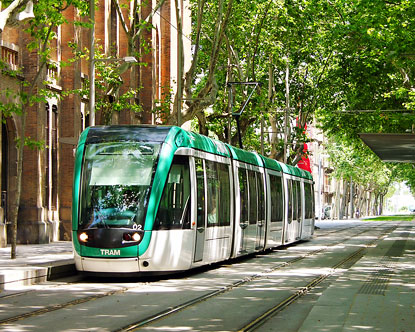 The Tram in Barcelona

3. How much ahead should I get to the stadium?

The best piece of advice we can give you is to arrive at the Stadium around one or two hours prior to the match. You will have time to find your seat (and there are over 95.000 seats in Camp Nou), and you can also enjoy the previous game, when the players do their warm-ups before the match. The atmosphere is one of the most impressive experiences you can live in Barça’s venue. You can seat quietly and see how Camp Nou gets filled with people minute after minute.

If you are hungry, an advantage to be on time is that you can grab something to eat before the game (in the half-time, bars get packed). There are half a dozen of bars where you can have a drink and eat a sandwich in Travessera de les Corts (Tres Copas, Casa Pin, Golazo del Sabor) or in Calle de Comandante Benítez (Frankfurt Munich , La Gespa de l’E-sport).

We strongly recommend arriving two hours before the start of the match if you really want to enjoy other options offered by the Futbol Club Barcelona institution, such as the Museum, which is actually the most visited in Catalunya. It is open until an hour and a half before the initial whistle. You can visit the enormous official Barça store to get your official Barça T-shirt or the ‘blue and garnet’ scarf, visit the Ice Palace or the different areas of the stadium’s restoration (Pans and Company and Estrella Damm Brewery, at access 9, or Tapas 24 by Carles Abellán, next to access 15).

If you have already had your lunch or supper, have also visited the Museum or simply haven’t bothered to buy more ‘souvenirs’, you can arrive at the stadium about 45 minutes in advance.

4. If I’m not hungry (but I might be later) can I bring my own drinks/food to the stadium?

You can access the stadium with sandwiches and containers containing less than 500 milliliters, without a stopper. Access is not permitted if you bring glass containers and cans. It is strongly advised not trying to hide these sort of objects because there is plenty of security that will make sure nobody ‘cheats’, and you are in risk of getting a permanent ban from entering the Camp Nou in future occasions.

We insist to remind you that the Stadium is packed with stalls that sell sandwiches and other treats (sweets, pop-corn).

By the way, alcoholic-drinks are not permitted… you can find beer, but not the one that you might find in your favourite bar.

Smoking is also not allowed within the premises.

5. Can I take pictures or record videos?

You can indeed take photos in Camp Nou, as long as you don’t use your pictures/videos for commercial purposes, according to FC Barcelona image/copyright rights.

It is a common mistake to confuse the use of the words ‘Barça’, ‘Barna’, ‘BCN’ or ‘ Barcelona’ on each occasion. The first thing you have to know is that ‘Barça’ refers only to the Futbol Club Barcelona team (including Handball, Basketball or Hockey sections). Mind the letter ‘Ç’, which is pronounced like and ‘S’. And, for your own good: do not use ‘Barça’ to refer to the city of Barcelona. A shorter way to name the city is ‘Barna’ with ‘N’, though it is less used. In writing, the word Barcelona is often shortened to simply ‘BCN’.

3 comments on “Watch a Barça match in Camp Nou’s Stadium: Tips and advices”