Our guide Irina at the Castle of Quermarçó

What a better way to discover the mind and the essence of such an eccentric and peculiar artist as SALVADOR DALI that with an expert guide?

A person who has studied his work but above all his life, tastes and anecdotes… That’s why we asked our expert guide Irina about this Catalan painter Salvador Dalí. Our guide visited the Castle of Quermançó (as we can see in the pictures) to discover more about this artist and the castle. The place where he learned about the construction. He was captivated and quickly expressed his intention to acquire it and give it to Gala. But who was Gala? She was the Russian wife of poet Paul Éluard and later of artist Salvador Dalí, who were both prominent in surrealism. She also inspired many other writers and artists. According to Dalí, from the castle of Quermançó “the most spectacular sunsets in the world” were seen. So he wanted to offer this precious and immaterial present every day to his wife Gala.

Exploring the castle of Quermançó

Frustrated in his attempt to have the castle, since there was no agreement with the owners of the construction, the artist tried to enthuse them with the project of building in the place a large organ, which would sound powered by the north wind, the tramontana (from beyond the mountains), an initiative that did not achieve the task either.
Subsequently, Dalí acquired the Castle Púbol for his inspiring muse, and thus the misfortune for Quermançó was sealed. There are many stories, which already touch the legend, about the reasons why the castle was not acquired by the painter, but for sure nothing is known. Yes we have a memory of the castle’s fascination with the genius Empordanés, a scene painted by Dalí, in the Palau del Vent of his Figueres theater, entitled “El Castell de Quermançó i la cabra d’or”.

In this painting, it refers to another of the legends that circulate about the castle, and according to which somewhere under the floor of the fortress is hidden a golden goat of the Jews who lived in Vilajuïga. Regional legends tell that in the interior of Quermançó there is an extensive tunnel, which ends at the beach of Port de la Selva, municipality of the Alt Ampurdán region, in the province of Girona, Catalonia, which was used by pirates to safeguard treasures. In its walls enclosing numerous rooms, cisterns and cellars. And that one of them still lives a queen dwells to which an enchantment put to keep a goat of gold. If someone were to find it one day, free the sultana from the curse and enjoy the splendid fortune represented by that goat, emulate the ancient vellocinos whose search was launched by the most intrepid Argonauts. Are you ready to look for the treasure? 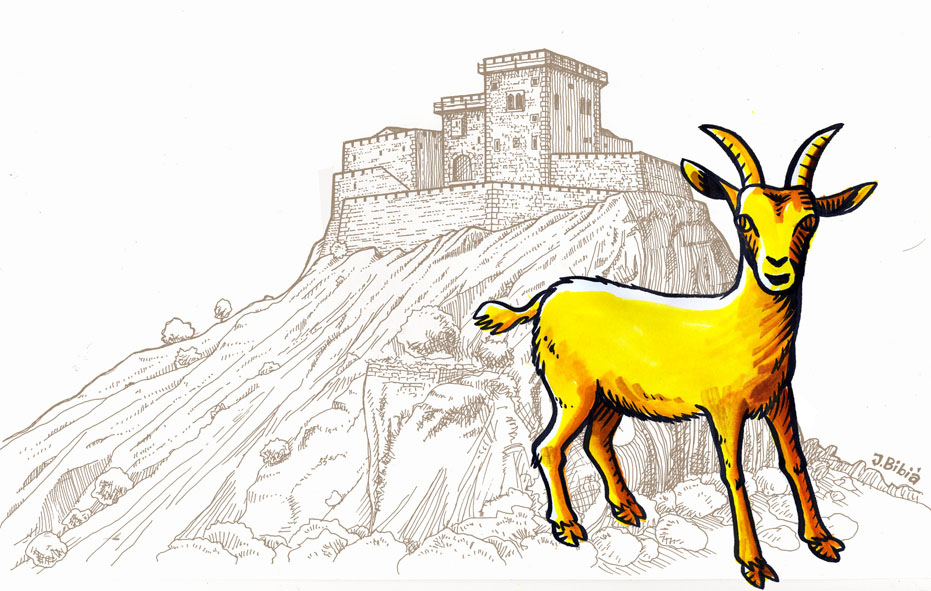 One comment on “The Castle, the Golden Goat and Dalí”