El Born Cultural Center is a unique and exceptional place that brings together three centuries of our history. Below the cast-iron structure of the iconic 19th century marketplace lies the Barcelona of 1700, the prosperous city that suffered the siege of 1714 and that put up an epic and heroic resistance before Catalonia’s national liberties were eventually lost, yet to be restored three centuries later. 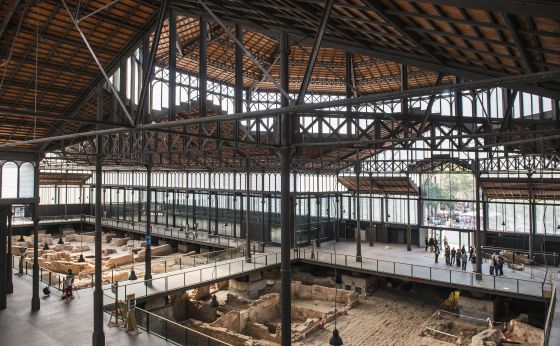 The old Born market welcomes the new cultural center, which includes an archaeological site with medieval and modern remains, as well as a permanent and temporary exhibitions. The Born Cultural Center houses the permanent exhibition “Barcelona 1700. De les pedres a les persones”, bringing together more than 2,000 pieces found at the site and its surroundings, which are a testament to the quality of life in Barcelona at that time. Meanwhile, the temporary exhibition “Fins a aconseguir-ho! El setge de 1714” recounts the events of the War of Spanish Succession. During the month of September you can visit both exhibitions for free.

The Born Cultural Center is both a civic space and a covered plaza that connects the La Ribera neighborhood and Ciutadella Park, through a continuous passage from Passeig del Born and the Plaça Comercial passage until it opens to Passeig Picasso.

In 2014, the tercentenary of the events in 1714 are celebrated, a fundamental date in the history of Catalonia. To recall everything that occurred in the country, a commemoration starts on September 11th to end on the same day in 2014. Many events which will take place at various venues of the city, such as exhibitions, itineraries, talks, etc.