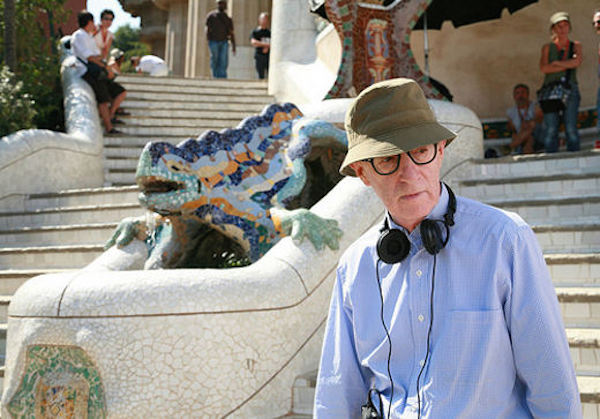 Discover the many faces of Barcelona with these 7 extraordinary films set in the city.

It is undeniable that Barcelona is a camera-friendly city. Many film-directors have fallen into its irresistible charisma and choose the Catalan capital to shoot some memorable movies.

Here is a list of some of these pictures which you may know or even have seen on theatres. If not, for sure you will know its starring actor or actress:

Todo sobre mi Madre – All about my Mother, Pedro Almodóvar, 1999

All about my Mother, Almodovar

An Oscar winner for Best Foreign Language Film in 2000, ‘All about my mother’ is considered by critics one of best Almodovar’s films.  Is a  multi-layered tribute to women starring Penélope Cruz and Cecilia Roth.

The story fascinates from minute one and the shooting beautifully captures the dynamism and generous spirit of Barcelona itself.

Barcelona in the film: The Sagrada Família; Palau de la Música; Hospital del Mar and Plaça del Duc de Medinaceli. These are some of the locations that you can easily indentify. 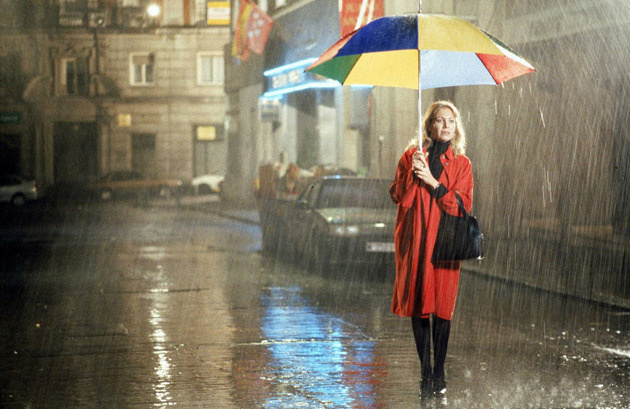 Cecilia Roth in All about my Mother

It is obvious that a list of movies that had Barcelona as scenario has to include Woody Allen’s “Vicky, Cristina, Barcelona”, the film which Penélope Cruz won an Academy Award for Best Performance by an Actress in a Supporting Role.

Despite some poetic and utopic license from the director, showing sumptuous homes with spacious gardens, the film definitely captures the beauty of the Mediterranean capital. Miró Museum, the Gothic Quarter, Las Ramblas, Santa María del Mar and, of course, Sagrada Família are locations that appear on the film, starred by Scarlett Johansson, Rebecca Hall and Javier Bardem. 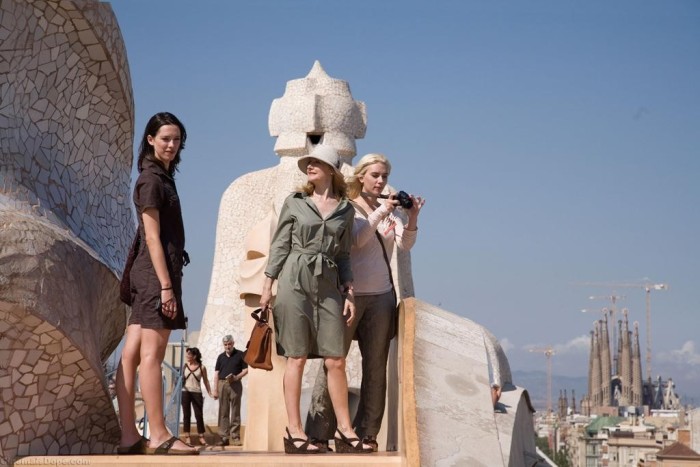 Vicky Cristina Barcelona at la Pedrera, with Sagrada Familia in the background

By the way, there is a romantic anecdote about “Vicky, Cristina, Barcelona”: Though it wasn’t the film where Bardem and Cruz met (it was back in 1992 in Bigas Luna’ “Jamón, Jamón”) the two actors fell in love during the shooting of the movie. A love story that, to this day, is still on. 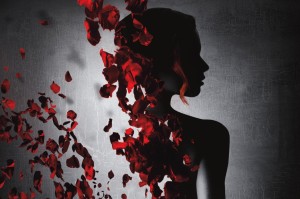 Perfume, the Story of a Murderer

Based on Patrick Süskind’s 1985 famous novel ‘Perfume‘. The film tells the story of Jean-Baptiste Grenouille, an olfactory genius who also has an homicidal “quest” to make the perfect scent.

The story is set in France in the 18th century, but several of the most relevant scenes were shot in Catalonia. Specifically in Girona, Besalú, Tortosa, Figueres – home of the Dalí Museum – and, of course, Barcelona.

The Gothic Quarter  was converted into a Parisian fish market. Look closely and you will see some Medieval-looking locations like these squares:

Other locations have some famous scenes: 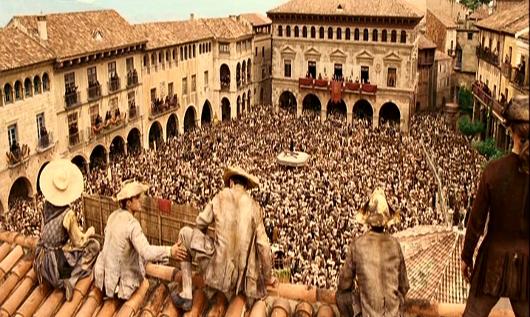 Perfume, the Story of a Murderer in Poble Espanyol

‘The Passenger’ is probably the most unknown film on the list, but it is a great opportunity to see how Barcelona was before its great pre-Olympics makeover. The plot revolves around a British-American journalist, David Locke (played by Jack Nicholson) who assumes the identity of a dead businessman while working on a documentary in Chad, but unaware that he is impersonating an arms dealer with connections to the rebels in the current civil war. 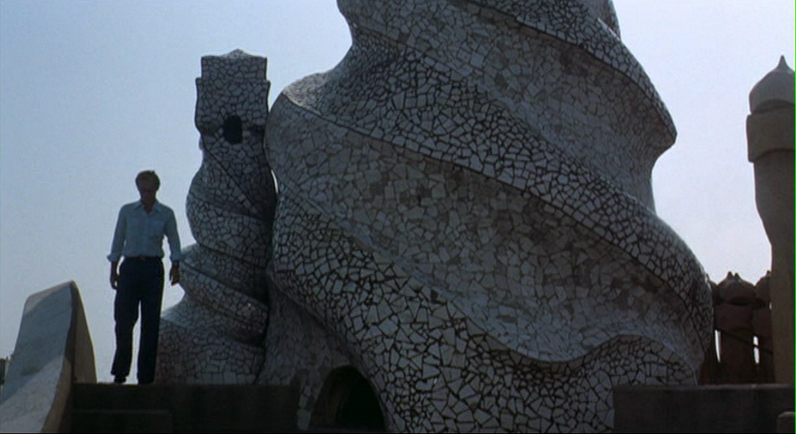 The Passenger – Barcelona as a film set in la Pedrera

In the movie, you can see Jack Nicholson walking down Las Ramblas and visiting a then unkempt Pedrera which actually has laundry hanging out on the spectacular rooftop! One thing that hasn’t changed is the cable-car ride from Montjuïc to the beach… Except that nowadays there is a beach in Barcelona.

A special feature of this thriller is that it was shot entirely in Barcelona and some of its surrounding cities, even though the shooting location could pass for any city of the United States of America. ‘The Machinist’ tells the story of Trevor Reznik, a machinist whose insomnia has led him to suffer an extreme weight-loss.j

Barcelona in the film: Tibidabo Amuzement Park and the airport El Prat

Tibidabo amusement park and Barcelona-El Prat airport where some of the places where the film was shot. But the movie will be remembered for the haunting performance of Christian Bale, who lost 62 pounds (28 kilograms) in only four months to play the role. According to a biography of Bale written by his former assistant, his daily diet at this time consisted of “water, an apple and one cup of coffee per day” with an “occasional whiskey”. His shocking look changed completely six months after, when he had to star in  ‘Batman Begins‘.

Back in February 2011, Barcelona had some honourable visitors from Hollywood for several weeks. Robert de Niro, Sigourney Weaver, Cillian Murphy and Elizabeth Olsen were shooting in the city ‘Red Lights’, a movie by Rodrigo Cortés, who also directed ‘Buried’.

The plot focuses on a physicist (Murphy) and a university psychology professor (Weaver), both of whom specialize in debunking supernatural phenomena, and their attempt at discrediting a renowned psychic (De Niro) whose greatest critic mysteriously died thirty years prior. Although there was also shooting in Toronto, Canada, most of the shooting was done in Barcelona. 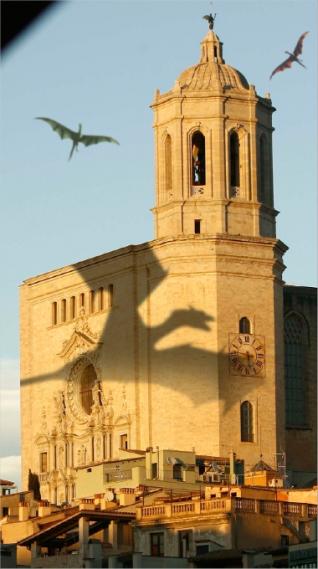 Cathedral of Girona – Game of Thrones

Alright. It’s not a cinema movie and has never been shot in Barcelona. Yet. But the inclusion of this mega-successful TV series to the list responds that part of the new season (which is going to be released on April, 2016), was recorded in places that you may see if you travel to Catalonia.

Where was it shot? Mainly in the town of Girona and the castle of Santa Florentina

For example, The Jewish Quarter of Girona, known as ‘El Call’ is one of the best well-preserved medieval Jewish quarters in Europe, with beautiful old buildings and charming narrow streets. So the ‘Game of Thrones’ team didn’t want to miss the chance to shoot in the city, as well as in Castell Santa Florentina, in Canet de Mar (40 km from Barcelona). Built on the foundations of an Ancient Roman villa, in the 16th century the castle passed into the hands of Dimas Muntaner, and in 1910 it was expanded and renovated by the modernista architect Lluís Domènech i Montaner. Its admirable medieval looks makes you understand why Santa Florentina was chosen.

So, come and see Barcelona, just like she is in the movies

Did you recognise any of these places in the film? Have we missed any? We would love to know

One comment on “Stand by to shoot! Barcelona as a film set”