Today’s post is about staying fit… or turning on the TV and grabbing a beer. Sports are part of our life, no matter if we practice some or just see our heroes struggling for their new success. As one comes across young people, or some veterans in a bar, or a family dinner, there is no exception: at least football is going to be one of the conversation topics. What else do locals in Barcelona like when it comes to talk about sports?

As the mediterranean city is located close to the range of mountains called the Pyrenees, many people now afford some days off to breathe fresh air at higher altitudes above sea level. There are many routes during summer for bicycle and hiking routes. Recently, the sky-running sport modality became very popular since a young catalan called Kilian Jornet became successful at this kind of competitions, now many people are trying sky-running, and the Pyrenees are just the perfect scenography.

Skyrunning champ Kilian Jornet, one of the latest local heroes

An other sport, climbing, has turned popular among young catalans. Although the city owns many facilities to practice climbing, those who trained enough start visiting natural walls to climb surrounded by nature. Later, when winter comes, some skiers are just waiting for the snow to arrive, some of the best ski areas are found in the principality of Andorra and the region of Vall d’Aran. In contrast, since the financial crisis started, very cheap sports imposed the new trends. Barcelona’s citizens started to run, not for a hurry, but for pleasure… and the sake of health. Barcelona’s closest range of mountains, la Collserola, a fantastic area for a walk because you grab a panoramic view of the city. Among all routes, there is the famous Carretera de les Aigües (‘the water road’) also perhaps the most crowded area by some runners, while others take the alternative running sites such as the Diagonal avenue and the coast line. 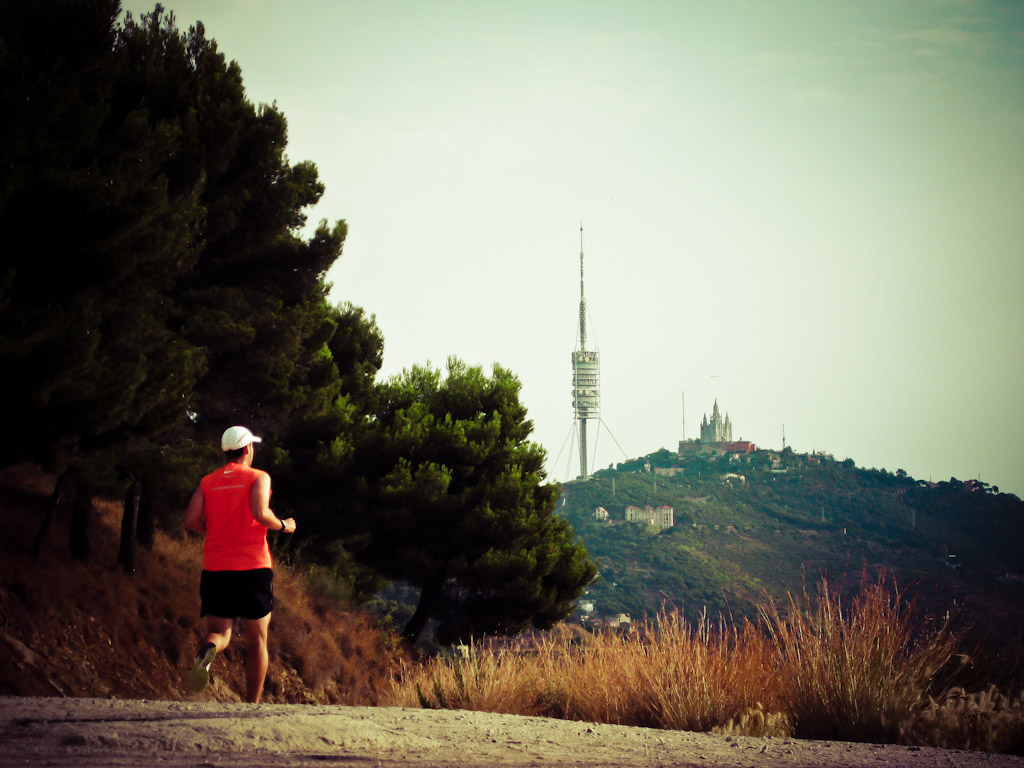 Running in Carretera de les Aigües, the rooftop of the city.

Water: Sailing in the Mediterranean

So if you ever went to the coastline of Barcelona, whether if it’s as a runner, for a walk, or for a glas of something, there is the fabulous mediterranean sea. Among all crowds on the beach, the water sports institutions take charge of sea sports. For example, the wind here is fantastic for sailing. We even have our self-invented small-sized catamaran called Patí català de vela (‘Catalan sailing skate’).

The Olympic games required an Olympic port, and this was crucial for further competitions and sailing championships. Along the whole coast of Spain there is a special sensitivity for water sports, from leisure to competitions. 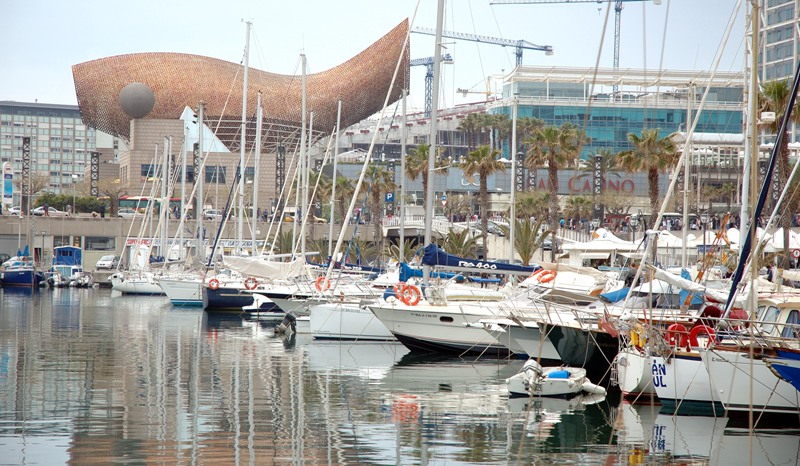 Locals have always felt special passion when it comes to wheels and engines, you just have to see how many motorbikes circulate around the city every day. Such passion comes from a tradition on manufacturing own bikes, popular brand names like Rieju and Montesa are a reference from the catalan motorbike industry. The circuit in Montmeló is part of the world championships of Moto GP and Formula 1. But before that, the Formula 1 circuit in Monjuic was almost inside the city and this was a first class happening for the inhabitants.

A long tradition exists in the practice of trial

The Montesa company was manufacturing popular motorbikes of all sorts. Many men started to take part of competitions, like Trial, one of the most practiced disciplines.

Those who preferred adrenaline wondered at motocross and the flying bikes, those who preferred speed could taste it at the Moto GP championship or just grab a really, really fast bike. Catalans like Dani Pedrosa or Marc Márquez are good at this.

If it’s twice, double fun: four wheels also have a huge popularity in motor sports, rally and Formula 1 are some of the most preferred modalities. Believe me, talking about motors is one of the never-obsolete topics in Barcelona.

From tennis to basketball

Generally many sorts of sports involving team working and ball playing are followed in Barcelona, there are however remarkable people who succeeded in their careers abroad. Remarkable tennis players from Catalonia have succeeded at the world ATP rankings, and we even have our own international competition. However, it seems like people here have more fun by playing padel, the popular racket sport.

As in tennis, some catalan heroes have succeeded overseas. Cases can be found in Hockey, Handball, Swimming, many cathegories of the olympic games and Basketball. Remarkable folks like the Gasol brothers are already part of history of Catalan, Spanish, American and generally Worldwide sports.

Football/Soccer as a religion

If any ranking of popularity in sports has to be made in Spain, the stats always put Football on the top – yes football! Soccer is not what you want to call it when you are in Barcelona.   Tradition and media have a lot to do with the football culture, but also the victories. In Barcelona there are two main teams who play in the national championship: FC Barcelona and RCD Espanyol.

Furthermore, the superstar players and the victories of FC Barcelona in the three main championships, Popularly referred as Copa, LLiga & Champions for the Spanish cup, the Spanish league and the European Champions League; they have contributed to the rising popularity of the club, the city and Football itself. No wonder that the most visited museum of Barcelona is the FC Barcelona Museum. 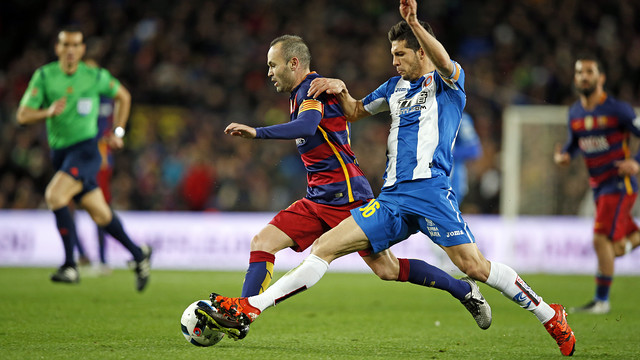 RCDE vs FCB, the two big soccer clubs in the city.

Going to a football game in the stadium Camp Nou is an experience you should not miss when you visit Barcelona, and see one of the best teams in the world live here. The popular name for the team Barça has even become the short name for the tourists for the city, and now everyone wrongly talks about flying to Barça or went to barca, although local citizens use Barça for the team, and Barna for the city. 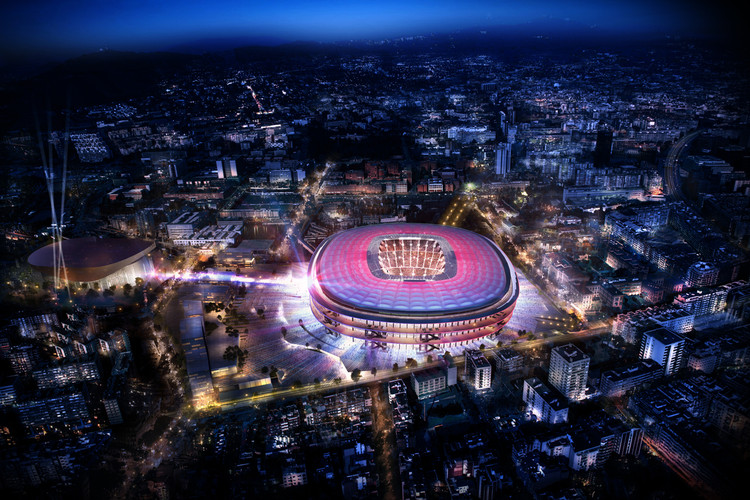 Football and sports are nowadays like religions, the passion people feel for a specific team, player or a kind of sport can be massive. I myself love to play football and watch FC Barcelona, and also like to swim, ski and run. What sports do you like? And which ones do you have as a hobby?

3 comments on “Popular sports in Barcelona – not everything is Football!”