Time is ticking – soon Camp Nou stadium will have a dramatic transformation so, if you want to see FC Barcelona just as it is right now, where great part of its history and victories have happened, now is the time to visit Barça’s stadium.

Even if you are not a sports enthusiast, you’ve heard countless times the name Camp Nou. A building that over the years has become one of the landmarks of the city of Barcelona and the house of its team: the FC Barcelona or Barça, as followers call it.

Camp Nou is the Mecca of football where you have to go at least once in your life. But hurry while it’s still possible! Don’t miss the oportunity to step on the grass where legends of the ball have run, such as Messi, Maradona, Piqué, Kubala, Guardiola, Xavi and Iniesta (forgive me fans, I know I have missed many, this stadium hosted some of the best athletes in all football’s history).

What is there to see at the Camp Nou?

Browse the locker room where Messi and Gerard Piqué hang their shirts, sit on the bench without being injured, enjoy the perspective view of the press commentators from their booths and see how shiny are the cups won for more than 100 years of competition.

But best of all, walk out on the field just as if you were Messi yourself. Camp Nou is Europe’s largest football stadium, you can see all the seats surrounding you, just imagine what football players feel when the crowd is there during a match.

What’s the best way to do it? With the Private Tour Camp Nou Barcelona & Olympic Games, guided by an expert who will take you through all the secret places of the club. 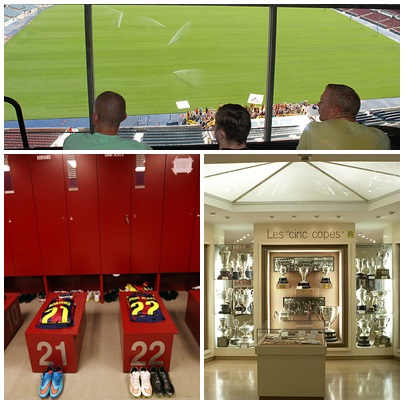 What are they going to do to the Camp Nou?

At this stadium they have fought great battles in excellent evenings of football. The number of followers has grown very quickly and the need to expand the field has grown with it. After a contest to choose the manager of its reform, the Japanese firm Nikken Sekkei with associates Catalan Joan Pascual and Ramon Ausió, will remodel the Camp Nou.

Guess what they want to call the new stadium? Nou Camp Nou – that is, the New New Camp – this time the stadium will be truly new, really new, at least for the first years 🙂

The deadline to finish its construction is 2021, starting the works from May 2017. Don’t miss the video of the remodelation:

The goals of the Nou Camp Nou are clear:

What are you going to do?

The Nou Camp Nou is truly going to be spectacular. But surely you want to see Camp Nou as it is right now. There are 2 ways to see it: in a football match or in a guided visit. In one the atmosphere of football fans is contagious and will definietly be an unforgettable experience. In the other, you will get to see all around Camp Nou and discover some of the clubs best kept secrets – you will truly understand why FC Barcelona is more than just a club.

So, put the trainers on and lets start warming up!

3 comments on “Last chance to visit the Camp Nou”