Starting at 9 am our Gaudí Tour with a licensed guide, without lines and the comfort of a bus, is perhaps the best way to know Barcelona’s most impressive monuments. 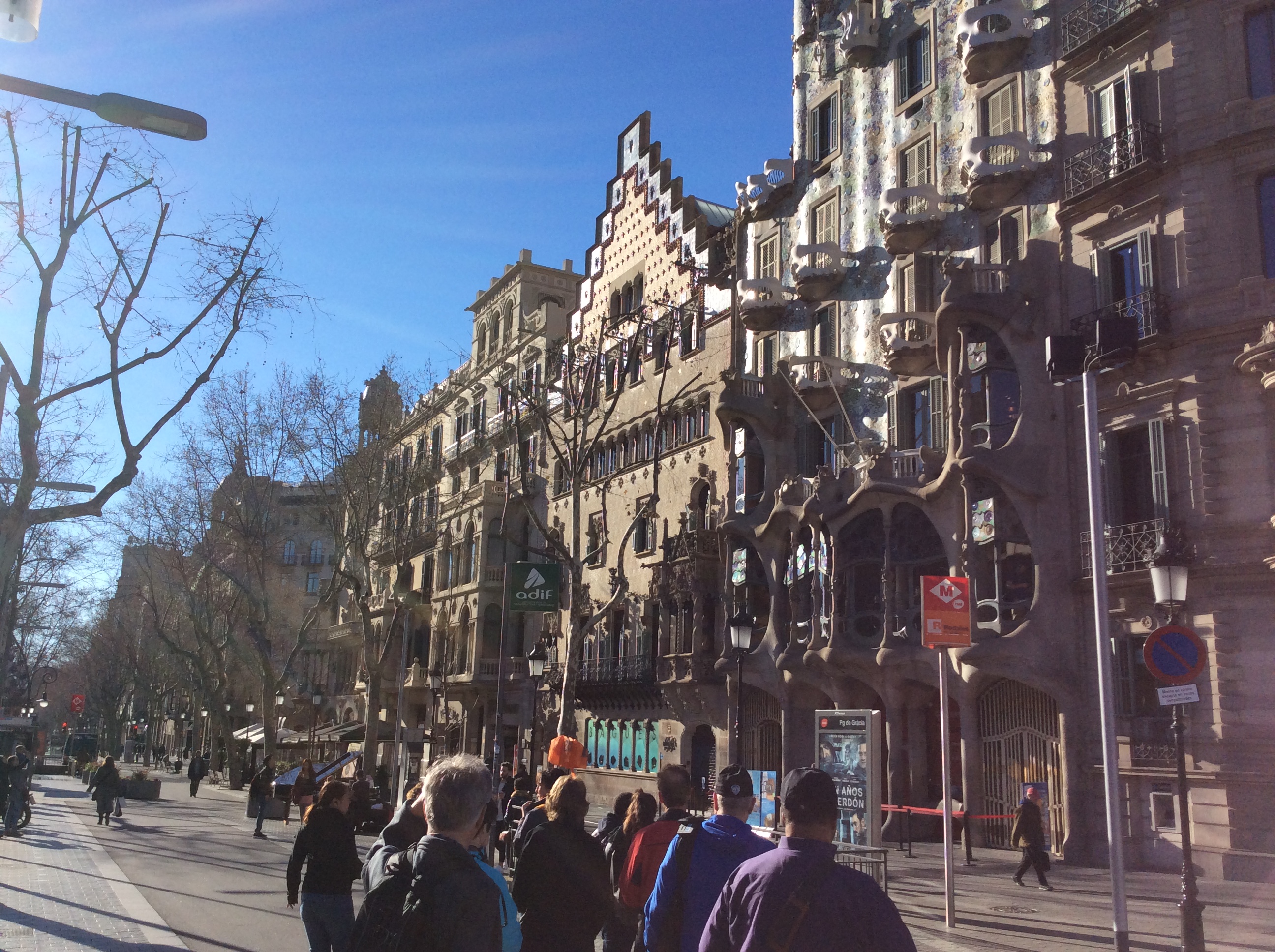 The Block of Discord consists on the most important and equally diverse facades by the three pillars of modernisme: Lluis Domènech, Josep Puig and Antoni Gaudí.

I was invited by Barcelona Guide Bureau to join the Gaudí Tour and I was so impressed! As a local, one does not do that sort of things. Living in Barcelona gives a large view on how travellers meet the city, but you sometimes do not live it by yourself. With an experienced, local and knowledgeable Licensed Tour Guide alongside with a group of more than thirty people: I was about to learn about Antoni Gaudí’s most relevant works. 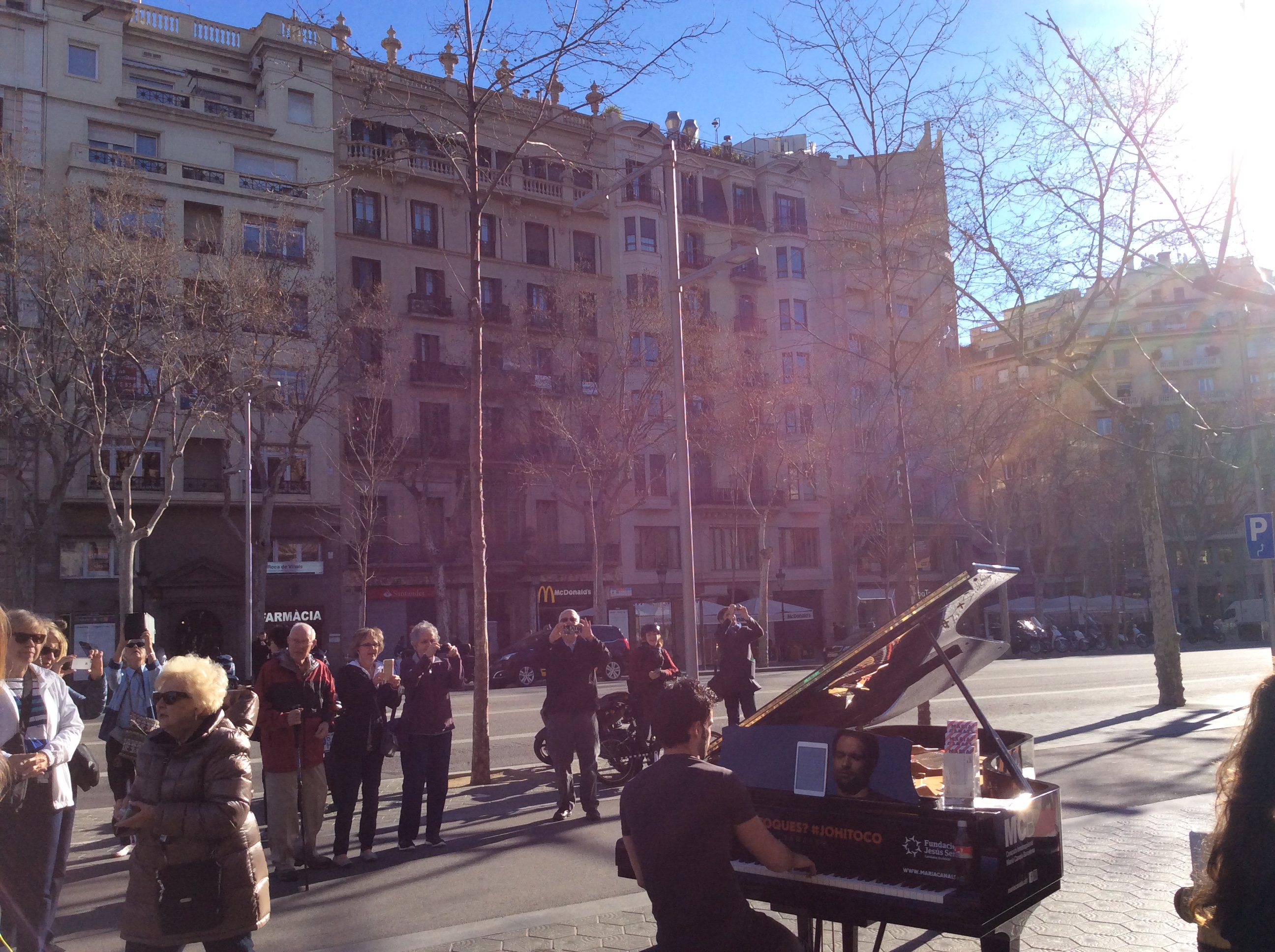 The María Canals piano contest took the music to the streets, allowing any talented pianist to perform a piece for everyone.

The biggest part of the group were cruise travellers staying for a couple of nights in Barcelona and part of their stay went in hands of our professional and close guide Sònia. She kept a friendly and at the same time leading attitude, making sure everyone stayed safe and sound, while we were touring around the city enlargement (Eixample) on a private bus: the ultimate trip to Antoni Gaudí’s two gems: la Casa Batlló and la Sagrada Família.

Casa Batlló is a House placed in the glamorous boulevard Passeig de Gràcia. Casa Batlló is like a travel in different times, you can feel the air of Barcelona in the early 20th century, and simultaneously feel like in Captain Nemo’s ship, the Nautilus. The hidden meaning of its shapes is fluently transmitted by the guide, after you skip the line and enter this futuristic house. 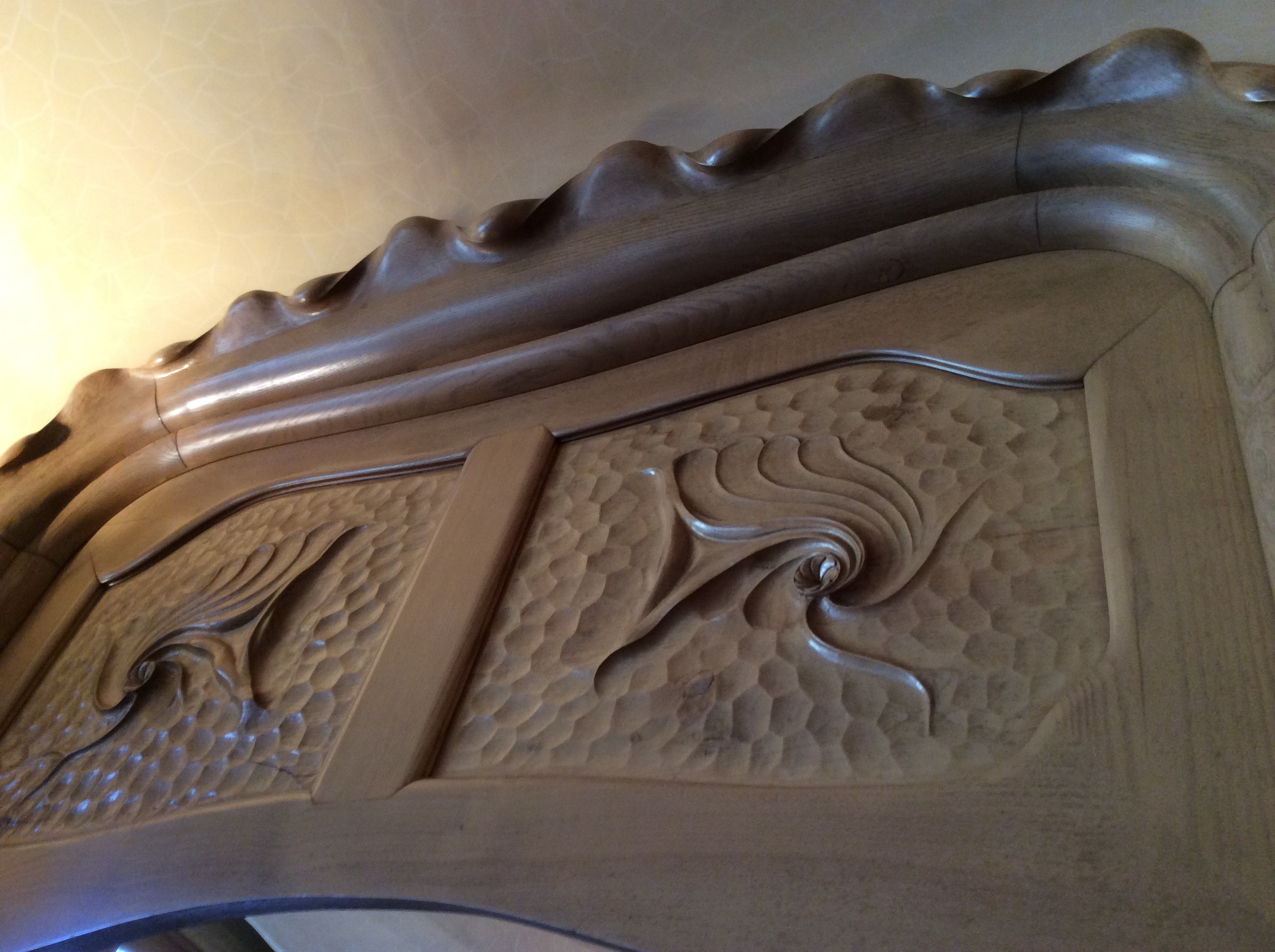 The Casa Batlló is full of details like this door from the living room.

La Sagrada Família (The holy family), this basilica’s centennial construction is divided in several episodes and is still not concluded. Fundraising is now happening through the visits and the construction of the biggest tower is carrying on. We skipped the line again and immediately saw how the inside is done, and it is really impressive. The different materials being used for the main pillars are as exotic as colourful. The nativity facade, the one made under the commandment of the genius architect. 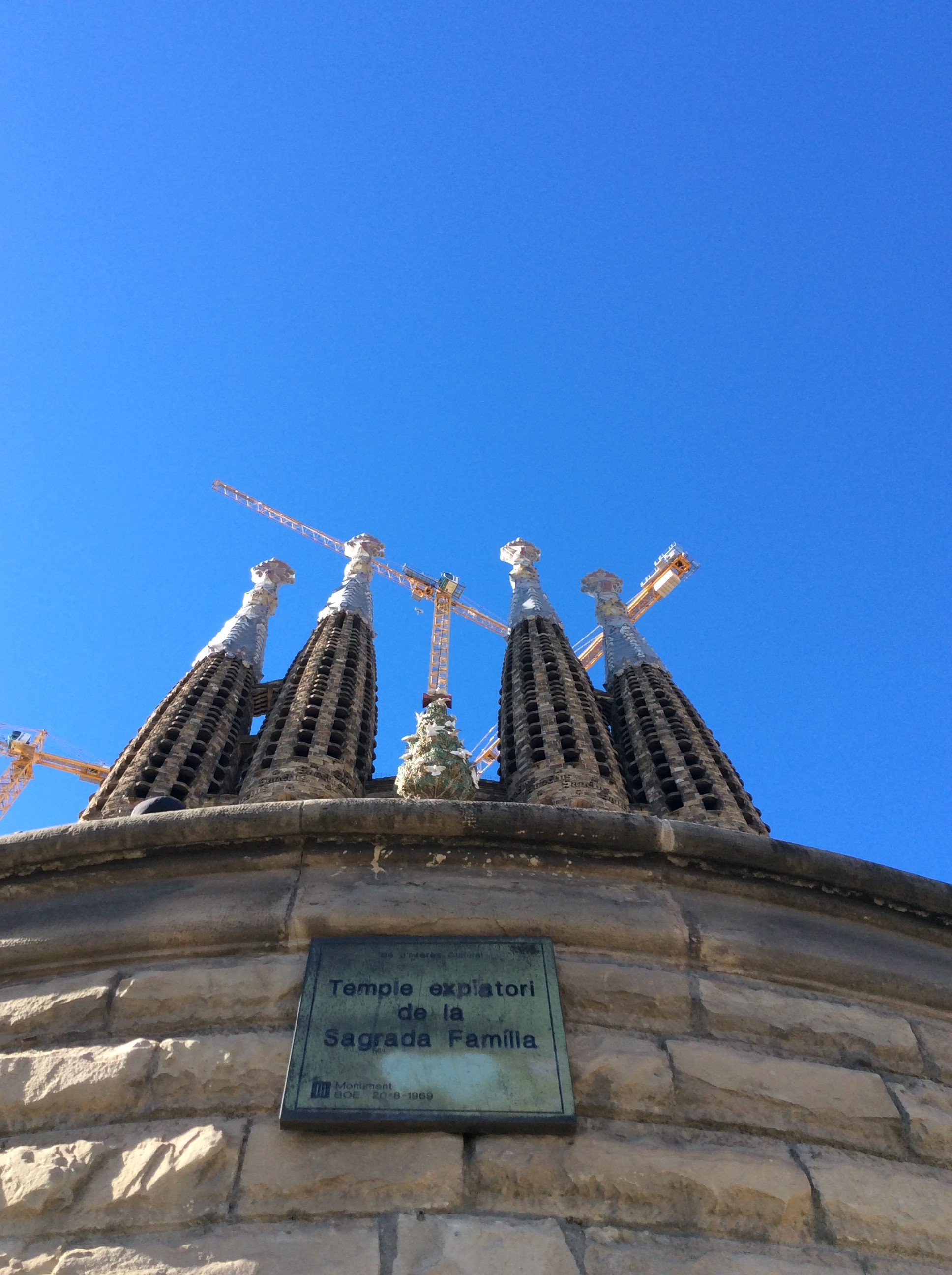 The towers built under the commandment of Antoni Gaudí.

What is it that people love so much about the Gaudí Tour?

I talked to some visitors, who were very nice people. Most of them came this time travelling by sea on a cruiser ship. Suddenly, I learned that many of our visitors had the habitude to keep journaling on their travel. It’s a good idea though, I guess, to keep so much information up to date, when you are visiting different places in a short period of time. It would be nice to read those journals, usually written by experienced travellers, and see what is the impression they had as soon as they stepped into the car, into the Casa Batlló (and its rooftop of fantasy) and, finally, into the Sagrada Família basilica. 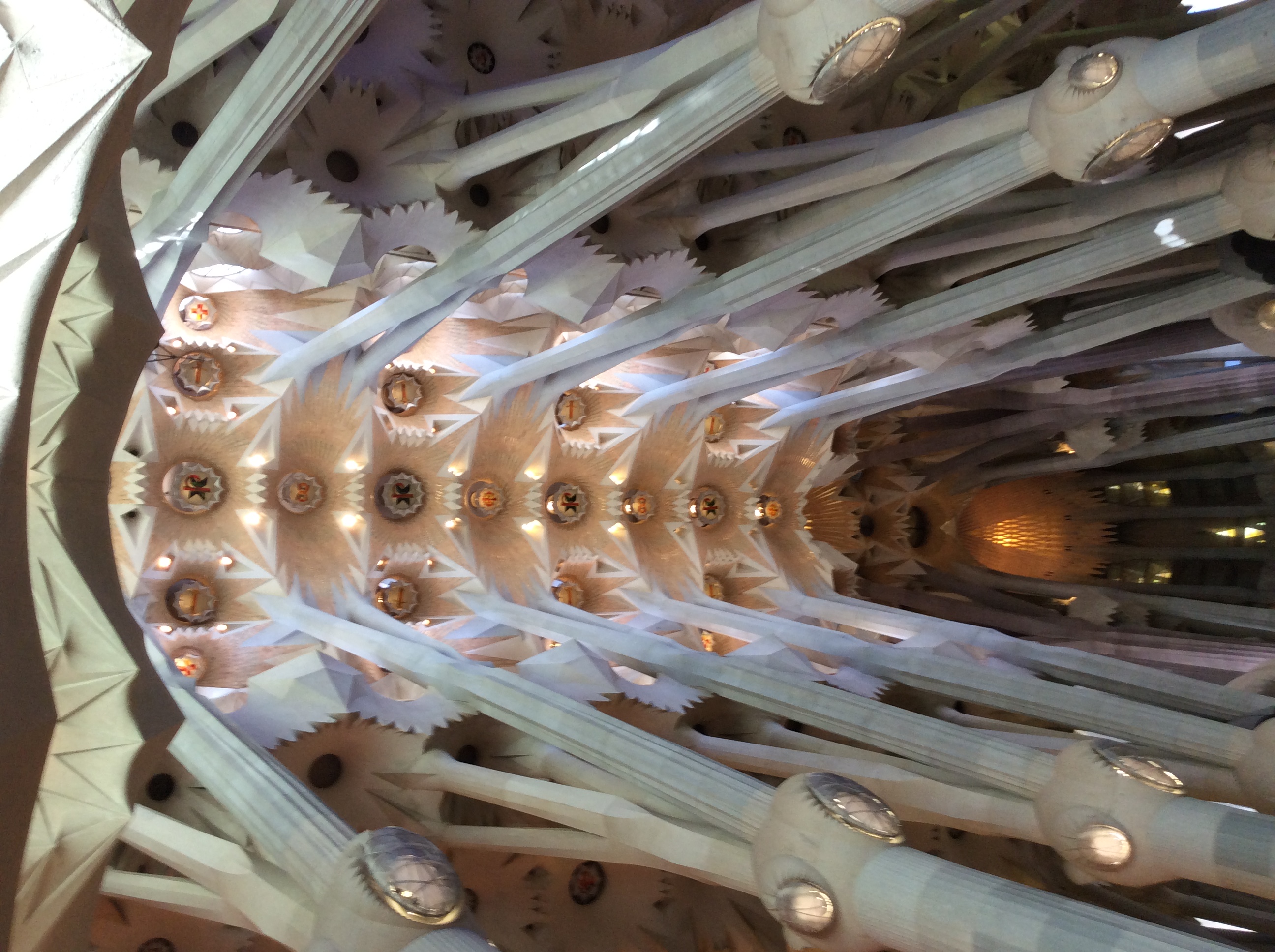 Sometimes I watched people’s faces and expressions of admiration, while listening to Sonia’s information about modern architecture, about history, about Gaudí, about Barcelona’s citizens’ relationship with the city. And you know what? The best advantage of a licensed guide is, no matter what subject she is explaining, you will get a summary of more than twenty books on the subject, added to the reading of articles, courses, trainings or conferences. The people were informed through the radio guides in the right moments, with the best anecdotes about the genius Gaudí, with accurate sense of humour.

What else could we ask for? At 12:30 the session ended up where we started, Plaça Catalunya, although some travelers decided to stay longer at the Sagrada Família. What would you like to do after having a Gaudí Tour in Barcelona?

5 comments on “Enjoying Barcelona in comfort with Gaudí”